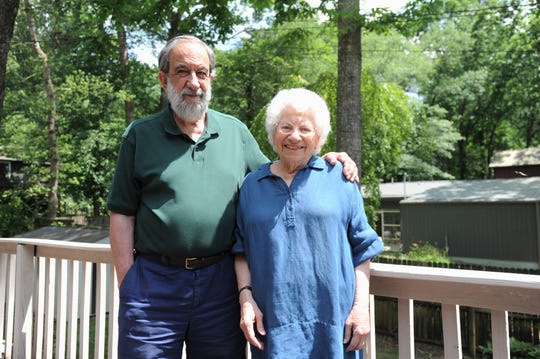 David Kherdian and Nonny Hogrogian have published more than 150 books between them. On June 6, the couple will hold a reading at the library in their new hometown of Black Mountain. (Photo: Fred McCormick)

It’s not uncommon, while strolling through a library, to find books containing the acclaimed writings of David Kherdian, or the award-winning illustrations of his wife Nonny Hogrogian.

Kherdian has earned critical acclaim throughout his writing career, which has spanned nearly 70 years, and is perhaps best known for his 1979 biography of his mother, “The Road from Home.” Hogrogian is the recipient of two Caldecott Medals, awarded annually to the illustrator of the year’s “most distinguished American picture book for children.”

A far more unforgettable experience would be meeting the couple in an intimate space, as Kherdian reads past and present works in a setting adorned by pieces of Hogrogian’s art. That's precisely what will take place at the Black Mountain-Tyson Public Library at 7 p.m. on Thursday, June 6.

Sponsored by the Friends of the Black Mountain Library, “An Evening with David Kherdian & Nonny Hogrogian” will not only give the community a chance to interact with the prolific artists, it will also be an opportunity for Black Mountain residents to welcome new neighbors.

“We moved here on the first day of spring, March 20,” said Kherdian a week before the schedule event, which is free and open to the public.

The couple, who married in 1971, left the country following the 2016 elections and moved to their parents’ native land of Armenia. Hogrogian suffered a painful back injury a short time later and they returned to the U.S.

“We went to California and visited friends, and Nonny’s niece lives in Charlotte so we ended up there for a bit,” Kherdian said. “We were in Asheville for about a year-and-a-half, but we were a little lonely and didn’t know anyone. We were just in the wrong place at the wrong time.”

As they explored neighboring towns in the mountains, Hogrogian and Kherdian discovered Black Mountain.

“And when we came here, immediately people came looking for us,” he continued.

Kherdian was born in 1931, in Racine, Wisconsin. His parents, like Hogrogian’s, were survivors of the Armenian Genocide, in which 1.5 million people were executed between 1914 and 1923.

As a child growing up in the midwest, he faced discrimination due to his ethnicity and found comfort in nature, while spending his time reading and drawing. 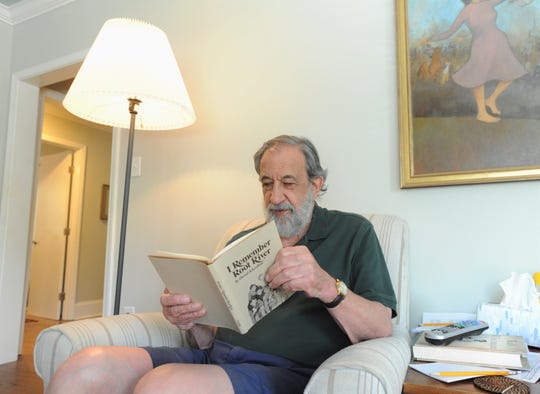 Award-winning writer David Kherdian will share his work on June 6 at the Black Mountain-Tyson Library, where he will be joined by his wife Nonny Hogrogian. (Photo: Fred McCormick)

A quest of self-discovery led Kherdian to begin writing poetry in his 30s.

Over the course of his career as a poet, biographer, publisher and editor, the practice of writing became an essential aspect of his existence, he said.

"I had to write or I would die," he said. "It's not because I want to be a great writer, but it's because it's the way I access my conscience and my need for being. It's my soul talking to me."

Hogrogian grew up in the Bronx borough of New York City. Her parents were artists and she earned a bachelors degree in fine arts from Hunter College. By 1960, her woodcut illustrations were published in the "King of Kerry Fair" by Nicolete Meredith.

Her career as an illustrator includes work in Sorche Nic Leodhas' 1965 book "Always Room for One More" and Hogrogian's 1971 picture book "One Fine Day."

Hogrogian's confidence in her artistic ability was shaken at a young age.

"I went through school as an artist, but I had a teacher who taught oil painting, and every time I started a painting he would take the brush from me and cover my canvas," she said. "I got so paralyzed that I couldn't paint and then one day my brother-in-law told me I should just start again. I told him I didn't know what to do and he said 'just start.'" 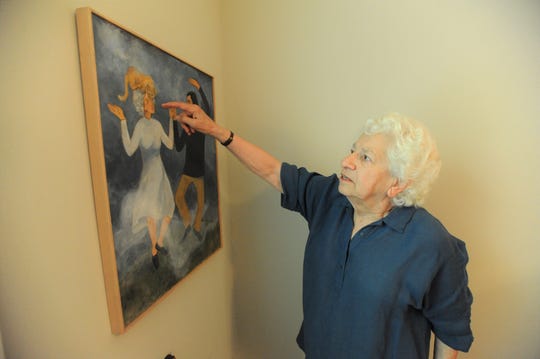 A painting depicting Nonny Hogrogian, her husband David Kherdian and the cat they kept as a pet for 18 years, hangs in the couple's Black Mountain home. Hogrogian and Kherdian will hold a reading at the Black Mountain-Tyson Library on June 6. (Photo: Fred McCormick)

Hogrogian followed that advice and what emerged was painting that still hangs prominently in the couple's living room today.

"That picture fell out," she said, pointing to the painting. "What it is, is my background. It's my people coming through Armenia, through the massacres, coming down into America. The ones who survived were my immediate family."

The painting depicts Turkish soldiers pushing people out of the country, and includes an image of Hogrogian's grandfather being struck during the exodus.

"I never felt that way on the surface, but that image is what fell out of me," she said. "I'm going to put it in the show at the library because David asked me to feature it."

Hogrogian and Kherdian have been frequent collaborators throughout nearly 50 years of marriage. They lived in New Hampshire for two years in the early 1970s, when Kherdian served as the state's "poet-in-the-schools." A joint collection of the couple's work can be found in the state's university library.

"We've each published about 75 books," Kherdian said. "We've been editor and art director for three different journals and we've had three small presses over the years. We did it all, and it was a labor of love."

While both have been semi-retired for years, they're energized by the move to their new home.

"We walk around Lake Tomahawk almost every morning," Hogrogian said. "We love it here."

The setting has been a source of inspiration for Kherdian.

Once the book is released, it will represent the seventh decade in which Kherdian's work has been published.

As the couple continues to settle into their new hometown, they are eager to share their work and stories during the upcoming event.

"I'll read and then Nonny will come up and we'll just take questions," Kherdian said. "People can ask whatever they'd like to know."

Hogrogian and Kherdian have participated in several of the informal sessions in the past, but this experience will be slightly different.

"We're old now," Kherdian said. "We're not as busy as we once were, so we're happy to have a chance to meet the community and share our stories."