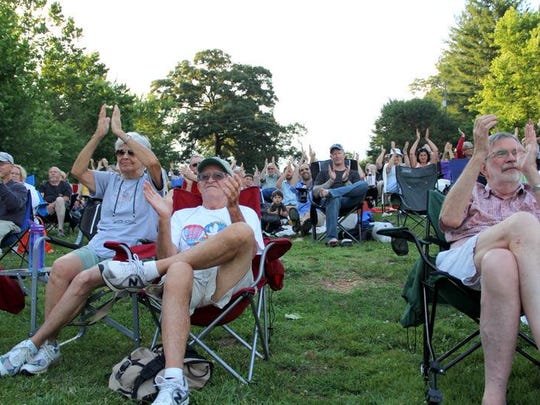 Park Rhythms, a popular Black Mountain concert series hosted by the recreation and parks department, will be held downtown on three dates this summer. The series is entering its 24th season at Lake Tomahawk. (Photo: Megan Bannerman)

A popular Black Mountain concert series will have a new home this summer.

Park Rhythms, an annual seven-week music series organized by the town’s recreation and parks department, will split time between its traditional location at Lake Tomahawk and a new venue in the heart of downtown.

The event will return to the lake for its 24th year at 7 p.m. on Thursday, June 20. Park Rhythms concerts will be held on the north end of the park, along Laurel Circle, on June 27 and July 11.

The series will shift downtown on July 18, 25 and Aug. 1, before returning to the lake on Aug. 8 to close out the season.

Relocating the series to the intersection of Sutton Avenue and Cherry Street was suggested by a group of downtown business owners, who approached recreation and parks director Josh Henderson about the possibility in January.

“When I took this job back in September, I wasn’t super excited about the idea of keeping Park Rhythms at the lake because of the environment there,” Henderson said. “It’s muddy, there is an issue with goose waste, there is inadequate parking and we’ve had complaints from people in the area about the music and people parking in their driveways or yards.”

The director had yet to find another suitable location for the series when Marcus Duarte, John Richardson and Casey McKissick approached him with an idea to bring the series downtown.

"It doesn't make sense for the town to promote an event that hurts its own people," said Richardson, who owns the Black Mountain Ale House on Cherry Street and Black Mountain Brewing on Broadway Avenue. "The servers, dishwashers and other hourly employees in the hospitality industry get hurt by this event, because it takes the crowd away from the businesses."

The town budgets $10,000 a year to fund Park Rhythms, according to Henderson.

"That's pretty much just enough to get the bands," Henderson said. "For everything else, we depend on sponsorship money."

Duarte, who owns the Red Radish & Little Sprout Carryout, which he's operated in Black Mountain for 21 years, said it was easier to support an event that brought visitors past the doors of local businesses.

"We like the idea of it being at the end of Cherry Street, because it does serve a dual purpose," he said. "It not only provides a venue for the event, but it can also be a boost to some of the local businesses that are such a vital part of this community."

Henderson was receptive to the idea.

"I told them I was looking at the possibility of moving Park Rhythms, but I wasn't sure where," he said. "I felt that downtown would be an ideal location, because a lot of municipalities host downtown concert series in the summer. Marion and Old Fort do that and I know of several other towns in the state that do as well."

Holding the concerts in town would address the issues associated with mud and goose waste in the grassy field where it's been held since its first year. There would also be fewer parking-related issues, Henderson added.

"Obviously, it does change the culture of the event," he said. "So I understand that people like being by the lake and the tradition associated with it."

Cherry Street will be closed to vehicular traffic south of the restrooms to accommodate the downtown events, while Sutton Avenue will be closed between Black Mountain and Broadway Avenues. A portable stage will be utilized to in the loading zone east of the depot.

"We know this works because we've seen it with Fourth of July and Holly Jolly," Richardson said of the site. "It's proven to be a great place for people to gather for these kinds of events year after year."

Thirty-five Black Mountain businesses supported moving Park Rhythms downtown, according to Duarte, who presented the idea to the board of aldermen during its agenda meeting on May 9.

He told aldermen that a group of more than 35 hospitality businesses in Black Mountain would support the move and offer financial support for the event.

The location of Park Rhythms is a staff decision, alderman Larry Harris said, "but I support this."

Board member Carlos Showers expressed his support for the move, but stressed he wanted it to remain a "family-friendly" event.

"I would not support any alcohol at this," he said.

Duarte told Showers that the group was not asking to be allowed to serve alcohol at the event.

"We have people at the park who we have to ask to empty containers that they've brought from home," Black Mountain police chief Shawn Freeman said. "If anything, it would be easier for our officers to patrol it, if it was more centrally located."

The proximity of the site to the fire and police stations would decrease response time in the event of an emergency as well, Freeman added.

Mayor Don Collins called relocating Park Rhythms a "good idea," but expressed concerns about the logistical challenges of moving it this summer.

Henderson and town manager Josh Harrold decided to try both venues this year.

"It wasn't really feasible to pull it all together to move it downtown this late," Harrold said. "Also, we don't know yet if we want to do this permanently yet or not. Holding it both places this year will give us a chance to see the advantages and disadvantages of both places."

There is a possibility that each venue will draw a distinct crowd, he said.

"I think it will have a little bit of a different feel downtown," Harrold continued. "And I think people who really love the lake location will still support it there."

In an effort to accommodate the families that attend Park Rhythms, Henderson said the recreation and parks department will set up an inflatable jumping house in a "kids zone" on Sutton Avenue.

"We've already booked the food vendors this year, so we will have the vendors that are already scheduled," he said.

Duarte would like to see future Park Rhythms in downtown feature collaborations with vendors from the Black Mountain Tailgate Market.

"I think that this could be a great opportunity for a lot of different people in the community to work together and create a truly local event," he said.

Moving Park Rhythms downtown will make the event one that business owners and their employees can support, according to Richardson.

"What it allows us to do as a business community is have an event that we can all co-promote," he said. "It would really build the sense of community."