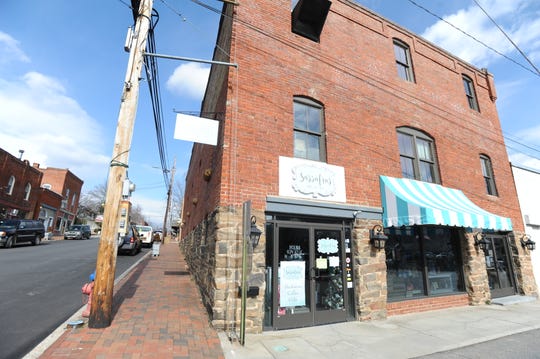 Sassafras on Sutton and Poppy Handcrafted Popcorn were forced out of the historic building they share in downtown Black Mountain when the roof collapsed on Dec. 11. It will be months until either is able to resume operations in the building. (Photo: Fred McCormick)

A Black Mountain building was deemed structurally safe for limited access nearly seven weeks after the roof collapsed in December, forcing a pair of local businesses to shut their doors.

It will be months before Poppy Handcrafted Popcorn and Sassafras on Sutton can resume their respective operations on the property, but the owner of the historic building is relieved that it's still standing.

A winter storm dumped over a foot of heavy snow on the Swannanoa Valley on Dec. 9 and 10. An employee of Poppy, which occupies the top level of the building, arrived for work on Dec. 11, and reported that part of the roof had collapsed under the weight.

The collapse ruptured a gas line to the building, forcing service to be temporarily interrupted.

Originally built in 1912, the structure served as a livery stable. A fire destroyed the upper level later that year, but spared the rock level below. The current brick structure was erected in 1915.

Ryan Israel purchased the property, which is a contributing building on the National Register of Historic Places, in 2012.

"This building was in need of structural repairs when it was purchased," he said. "We redid all of the structural aspects of the lower level over five years ago. That included removing wood and putting in steel, redoing the footers and everything.

The roof of the upper level is supported by a series of wooden trusses.

"Those are attached into the brick with a metal pulley," Israel said. "That was how they built these clear span buildings in the early 1900s."

The renovations also included a new roof, which was covered with a 60 millimeter thermoplastic polyolefin membrane, and replacing a truss on the upper level near the center of the structure.

It was a truss system on the building's north end that failed under the weight of the snow, according to Israel.

"When that truss fell the roof came in on both sides, and with all of that snow up there, it basically created a swimming pool on the roof," he said. "That TPO membrane system held together."

While the membrane kept the snow from falling into Poppy, the building was in peril.

"We were very worried about what was going to happen with the building," he said. "We weren't sure if it would fall or if the rest of the structure would fail in some way."

Town of Black Mountain building inspector Dan Cordell prohibited any access to the building while engineers assessed the structural integrity.

"My guys went in there the day of the collapse to assess everything," Israel said. "There was probably 10 inches of snow on the roof and you couldn't see much up there so my crew started bracing everything around the failed truss."

As the snow melted, Medlock & Associations Engineering of Asheville found that the shift in weight caused most a "deflection in the remaining truss systems," according to the building owner.

"The only one that didn't shift was the one truss in the middle that we'd replaced," Israel said. "That truss saved that building."

Engineers are in the process of determining the extent of the damage to the remaining trusses.

The plan, Israel said, is to replace the failed truss and then repair those that shifted as a result of the collapse.

"That will guarantee the integrity of the building for hopefully another 100 years," he said.

Utility services to the building were restored after Cordell granted limited access on Jan. 25.

"Now we're waiting on an engineering design for replacing the failed truss and to repair the deflection in the other truss systems," Israel said. "That will be our plan for how to proceed forward, but it takes time."

Israel said he would like to make those repairs in phases to speed up the process.

"Our number one goal is to get the tenants back in business," he said. "These are small local businesses and not only are we concerned with getting the proprietors back in business, but each of them have employees who rely on their jobs. There are a lot of people impacted by this and we're working as hard as we can to get the building back together."