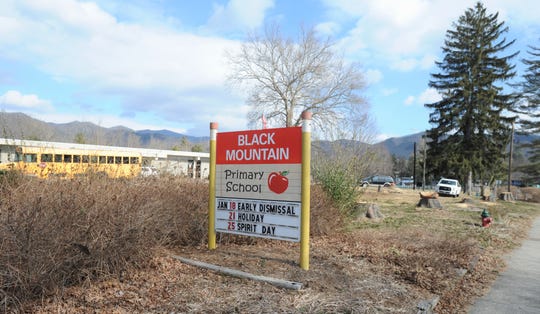 A large space that was once home to several massive trees will become a parking lot, after Buncombe County Schools had the evergreens removed as part of its comprehensive school security plan for Black Mountain Primary. (Photo: Fred McCormick)

The campus of a local school has a drastically different appearance after several massive evergreen trees were removed in recent weeks.

However, the decision by Buncombe County Schools to have them cut down was made with safety in mind, according to officials.

The group of trees, which stood in front of Black Mountain Primary along East State Street, towered over the single-story building.

“The trees were quite old,” Buncombe County Schools director of communications Stacia Harris said in an email. “(They) posed a hazard during strong storms that could knock off branches or topple the trees themselves.”

Removal of the pine trees was part of the school's comprehensive security plan, which included securing the perimeter of the campus and funneling visitors to a single point of entry at the front door. The area where the trees once stood will become a parking lot.

This move, according to Buncombe County Schools facilities director Tim Fierle, allows staff to be more aware of who is on campus.

"It is unreasonable and unsafe to require daily visitors and volunteers to park in the rear lot and walk the streets around the perimeter of the campus," he said.

"The parking lot in front of the school that is being built will provide parking for the many daily visitors to enter the school at the front door and for the school administration to control their access."

The school district plans to plant new trees farther away from the building to replace the ones that were removed, according to Harris.

"The safety of our campuses is our top priority," she continued. "We work diligently to maintain our property in a way that supports that goal."