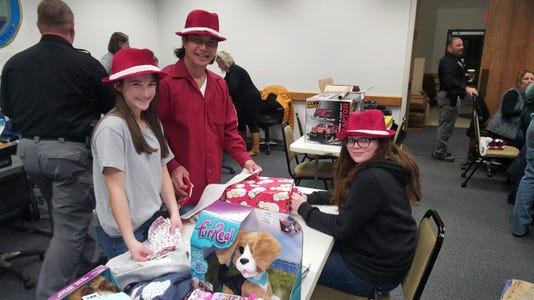 Dan Hale, center, and his daughters Bella and Amelia participate in the Elf Party at the Black Mountain Police Department on Dec. 4. Dozens of volunteers wrapped gifts that will be distributed to children in the community the week before Christmas.(Photo: SPECIAL TO BMN)

Dozens of volunteers filled the training room at the Black Mountain Police Department on Dec. 4 in an effort to make Christmas special for local children.

Town employees, their families and residents gathered for an “Elf Party,” in which they wrapped hundreds of gifts for Black Mountain kids who, otherwise, would not have received presents. Members of the department and other town employees were set to deliver the gifts the week before Christmas.

For the past two years, from its tent at the Sourwood Festival in August, the police department has held fundraisers designed to help community members in need during the holidays. The public services department also contributes money for the program, with contributions from employees and their family members.

Days before Thanksgiving, department personnel and other town staff and officials delivered meals to families and non-perishable items to seniors around Black Mountain. Over a dozen meals were delivered that day.

The department uses the remaining contributions to purchase Christmas presents for children who need them, according to chief Shawn Freeman.

"This is a great way to get citizens and the local government working together to do something special in the community," Freeman said. "It's important, especially around this time of year, for people to come together and help take care of those who are less fortunate."

Last year the department raised money to buy gifts for 17 children, according to Freeman. 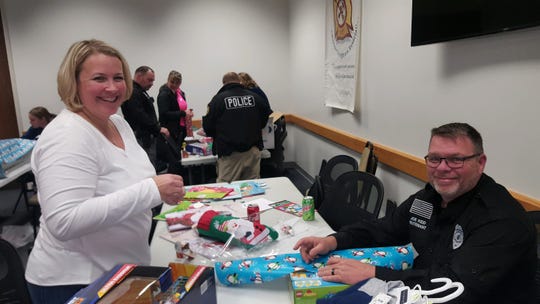 Lieutenant Joe Kidd and his wife Cortney help wrap presents in the training room at the Black Mountain Police Department on Dec. 4. (Photo: SPECIAL TO BMN)

"This year we started out a little slower than last year, and we had about eight or nine," he said. "We don't solicit donations for the program, but as word got out we had more and more people interested in helping."

As people continued to drop off gifts, wrapping paper and donations at the police station, Freeman and his wife Rhonda were able to purchase more gifts. By the time volunteers began arriving at 5 p.m. for the Elf Party, presents for 24 children had been purchased, according to the chief.

"We had nine work stations and each table was devoted to one child," he said. "As soon as that table was done wrapping gifts for that child, we would box everything up and bring gifts for another child into the room."

Freeman thanked the volunteers before the group ate pizza together.

"I told them that without them being there to wrap, without the donations that have continued to come in — we've had some children stop by and drop off toys for other children — this wouldn't even be going on right now," he said. "This truly is a coordinated community effort."

Officers and town staff will deliver the gifts to the families the week before Christmas, when they will once again drop of boxes of non-perishable food for seniors in need.

The number of children the department will provide gifts for continues to go up through the first week of December, the chief said.

"People are still stopping by the station and reaching out to help," Freeman said. "So I expect we'll be able to help a few more."