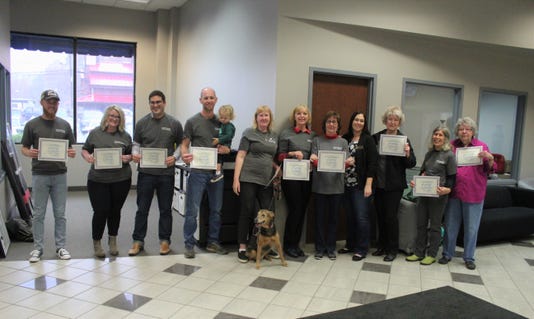 The inaugural class of the Black Mountain Citizens Academy and town clerk Angela Reece stand together on Nov. 2, following a ceremony. The course was designed to encourage participation in local government by educating citizens on how it functions.(Photo: Fred McCormick)

As early voters around the country made their way to the polls to cast votes in midterm elections, an underrated but equally important civic duty was being recognized at the Black Mountain Public Services & Recreation and Parks building on Nov. 2. The smell of smoke from a grill and a festive mood filled the air as town staff, elected officials and other members of the community came together to celebrate the graduation of the inaugural class of the Black Mountain Citizens Academy.

Fifteen residents graduated from the course, which was designed to encourage involvement in local government by giving participants an inside look at each of the town’s departments over seven weeks. Ten of them attended a cookout and and informal ceremony, in which they received certificates commemorating their completion of the class.

The seeds for the idea were planted when town clerk Angela Reece attended a course at the UNC School of Government. While there she met contemporaries from other towns who had organized similar programs to help bridge the gap between citizens and government. Those towns were experiencing rapid rates of growth and found the courses “opened up the lines of communication,” according to Reece. 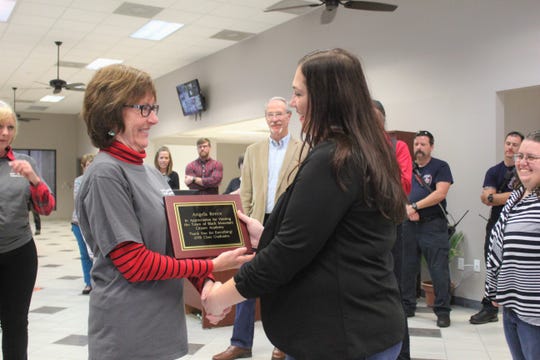 “I’ve been working on this for two years,” she said. “We recognize that there is a need to spread meaningful, truthful information about how our town operates. This class helps citizens understand where their tax money goes and how it’s spent. For us, it will help learn how to better serve our citizens.”

Last November, Reece presented the board of aldermen with an agenda for the course. It included a series of eight weekly classes led by department heads, who would give the class a detailed look at how their respective departments function. She requested funding for the Citizens Academy in January and coordinated with staff to set the dates for each session.

“The logistics were not easy,” she said. “It was an extraordinary use of resources and a lot of planning went into this course.” 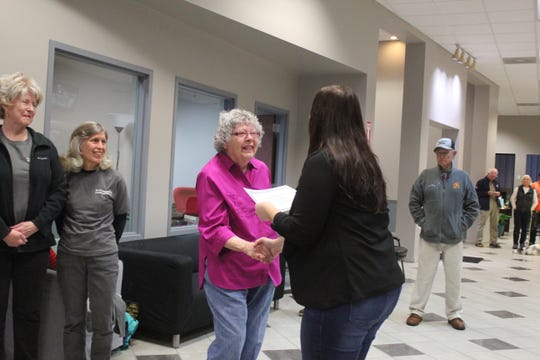 Reece introduced the Citizens Academy to the public through the town’s website and Facebook page in the spring. She quickly began receiving applications.

“I was happy to see a diverse group of people,” she said of the those who applied before the July 30 deadline. “We had people with a wide range of ages and backgrounds.”

Each session was between two - three hours and included dinner, according to Reece. The group met on Thursdays at 5:30 p.m. beginning Sept. 13, when they were welcomed by the mayor and aldermen. The initial meeting gave them an overview of town government.

Susan Leive started coming to the area with her husband in 2000 and became a full-time resident eight years later. As a semi-retired certified public accountant, she had a limited understanding of how government functioned on the local level.

“I’d been interested in how small town government works and I’d looked at ordinances and things like that in the past,” she said. “My background is corporate and this course offered the perfect opportunity to learn, not only about how small towns operate, but how our town operates and the challenges it faces.” 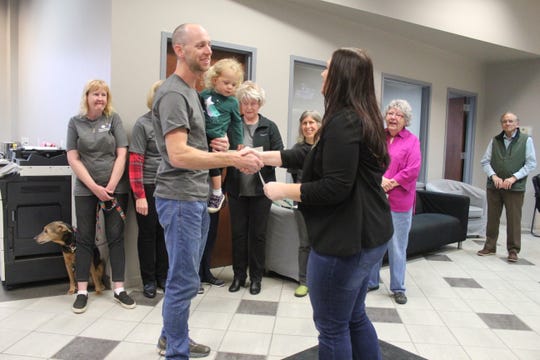 “One thing I learned was just how extraordinary we are as a town,” she said. “We have diligent, hard-working town employees and I’m so impressed with our police and fire departments and all of the work they do.”

Leive, said she learned more about municipal government than she expected she would going into the course.

“It really changed my perspective,” she said. “I left with much more of a sense of how the town operates.”

Michael Neder moved to Black Mountain with his wife and two daughters a couple of years ago. The Marine veteran was drawn to the “small town feel,” which made the area feel like “an ideal place to raise a family.” His understanding of local government was minimal, he said, but he was interested in learning more about his new hometown.

The course gave him a better understanding of the priorities of town officials, according to Neder.

“It made me want to be an ambassador for the town,” he said. “If I hear conversations where people are complaining about decisions the town makes, I would absolutely suggest that they try to get a little more involved and learn about how things work there. Your eyes would absolutely be opened up because these people are working hard with the sole intention of making our lives as good as possible.”

Neder was struck by the dedication of the employees he met while taking the class.

“I was very impressed with not just that they work hard to make the town better, but they actively seek out more certifications and qualifications,” he said. “That makes those teams, within those departments, that much more capable of handling things internally, which saves the taxpayers money.”

There are few citizens in Black Mountain as civically involved as Elaine Loutzenheiser. She currently serves on the town’s Historic Preservation Commission and has served multiple terms on the Zoning Board of Adjustments and Planning Board since moving here from Florida in 1990.

Loutzenheiser is a familiar face at aldermen meetings, which she attends regularly.

“I learned things I didn’t know from this,” she said before the graduation ceremony. “It was an enlightening experience, as well as educational.”

Loutzenheiser’s classmate, Frank Cappelli, joined her on the HPC as a result of the Academy.

“Angela told us there was an opening on the Historic Preservation Commission,” Cappelli said. “She asked if any of us would be willing to fill the spot, and I volunteered.”

The thoroughness of the presentations given by the staff stood out to Cappelli after completing the Citizens Academy.

“For them to sit with us for hours and go over what their departments do and how different things are funded showed real commitment,” said the owner of the My Place Inn. “(Assistant town manager and finance director Dean Luebbe) walked us through the budget line by line. It really explained a lot about the different challenges the town faces when it comes to funding.”

Theresa Fuller also had questions about funding when she signed up for the course. As the owner of the Arbor House of Black Mountain, she looks out over Lake Tomahawk many times a day. The view guests of her bed and breakfast have of the lake, which is owned by the town, is key to her business.

“It needs a little TLC,” she said.

Fuller has worked with the town's recreation and parks department in the past, she said, but with recent turnover in the department she embraced the opportunity to learn more.

"I really wanted to continue to be educated on what issues our town is dealing with," she said. "A lot of people get on social media and complain, but you can't do that unless you're really willing to educate yourself."

The resourcefulness of each department was "eye opening" to Fuller.

"The town works on minimal funds and every department is trying to give back by having their own grant writers. Grants are getting harder and harder to get," she said. "So these departments try to save the town money that way. They're also innovative on how the employees work, trying to complete as many projects in-house as possible."

The town plans to offer another Citizens Academy next year, largely based off of the success of the inaugural class, Reece said.

"As a community we can come together if everyone understands how the system operates" she said. "This group got a lot out of this experience and I hope they'll help when we offer it again next year."

Reece thanked the group before presenting each member with a certificate. The class responded by presenting a plaque to the town clerk for her work in organizing the Citizens Academy.

"We're all so grateful to Angela and the town for giving us a chance to learn more about how our local government operates," Leive said. "I learned a lot from this experience and it really wouldn't have been possible without her. She was amazing and the town is lucky to have her and the rest of the people who work so hard to make it so special."