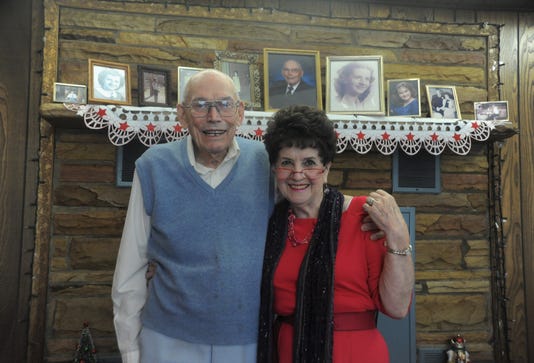 Earl Snypes had more than his fair share of what he refers to as “close calls,” serving in three major conflicts in World War II. He vividly remembers diving headlong into a building behind his buddy during the Battle of the Bulge, the second-deadliest battle for American soldiers in the nation’s history.

Snypes, who was born in a log cabin on Bald Mountain in Buncombe County, doesn’t know how he made it back home to the mountains. His wife Carolyn, a native of Ridgecrest, offered her own explanation.

“I think the Lord spared him just for me,” Carolyn said with a smile, days after the Snypes celebrated their 70th anniversary on Oct. 1.

Earl was born in 1925 and his family moved to Nebo five years later. He was drafted into the Army in 1944 and after completing infantry training he left for Europe, where the war was raging.

Around five years ago, Earl began recalling some of his experiences to Carolyn. He had never shared stories from the war with anyone else. The two began writing many of them down in a book and gave them to their daughter Linda Hodge.

Some of those memories, like one in which he was gathering a group for an evening chore, are stark reminders of the horrors of war. 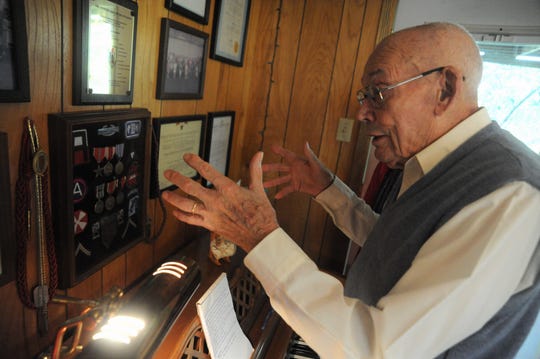 Earl Snypes talks about he various patches and medals he received for his service in World War II, in which he took part in three major conflicts. (Photo: Fred McCormick)

“I was told to get a squad together and I started out to each foxhole where they were,” Earl said. “One of those foxholes I could see a light shining. I told them to turn that light out, and no sooner than I said that I heard a shell coming.”

Earl remembers trying to enter that foxhole after hearing an incoming projectile, but it was covered.

“I just fell down in front of that foxhole,” he said. “As soon as that shell exploded, I heard another one coming, so I took off to the foxhole I’d been in first.”

Ridgecrest native Carolyn Snypes plays the piano in the home she built with her husband of 70 years in her hometown. (Photo: Fred McCormick)

Chunks of frozen dirt flew up all around him, Earl continued, and when the smoke cleared he learned how fortunate he’d been not to find shelter in the initial place he sought it.

“There were three men in that foxhole,” he said. “Two of them died and the other one wrote to the sergeant about a month later that when he came to he was at a hospital in London.”

A 21-year-old Earl visited his brother’s family in Ridgecrest when he returned home in April of 1946.

“As I was going out past this old log house down here,” he says motioning out toward Old U.S. 70, “I see here swinging in a swing. I walked by and said ‘I’m going to marry that girl.’” 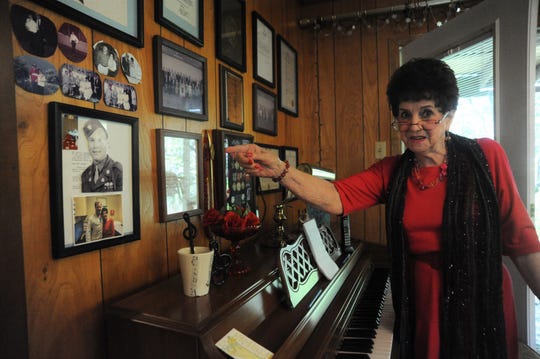 Carolyn Snypes points to a picture of her husband Earl that was taken just before he came home from World War II. The Snypes celebrated their 70th wedding anniversary on Oct. 1. (Photo: Fred McCormick)

Earl and his brother opened Snypes Grocery in Ridgecrest and Carolyn worked there. On Oct. 1, 1948, they were married in Carolyn’s childhood home.

“My mother made the cake and we had the reception with both families,” she said. “It was great.”

The two moved into an apartment in Ridgecrest until Earl took a Coca-Cola sign down from his store and sketched out plans for a home just down the road, which they built in 1951 and still live in today.

“We built this place together,” Carolyn said. “And let me tell you what I remember. It’s high off the ground and he was on one end nailing fascia board and guess who was up on a ladder on the other end holding it.”

The Snypes raised Linda and their son Henry in the house, as Earl worked at the Post Office in Ridgecrest and Asheville. Carolyn worked at the Ridgecrest Conference Center and what was then known as Montreat-Anderson College.

When Earl retired in 1980, the couple visited every state capital along I-40 as they drove across the country. They took the two-month trip with their granddaughter, Jennifer, one of their three grandchildren and four great-grandchildren.

"We're very blessed to have the family we have," Carolyn said. "We love spending time with our children and grandchildren."

The Snypes made it a point to keep in contact with Earl's fellow veterans during their post-retirement years.

"Many of the men he fought with settled up north after the war," Carolyn said. "We had the opportunity to go the reunions every summer."

Carolyn would write letters to Earl's "buddies," as she calls them, to help arrange their meetings. Medals, badges, plaques and other reminders of Earl's service to his country hang on a wall in the Snypes home.

"I'm really proud of his Bronze Star," Carolyn said of the medal proudly displayed above their piano, where Earl said he's heard his wife play countless times. In fact, it's where Carolyn practices to play at Mountain View Church in Black Mountain, where the couple attends.

They were recognized by their church for their 70 years of marriage the day before their anniversary. Carolyn was overwhelmed by the attention, she said. One question came up more than any other as their fellow churchgoers congratulated them on seven decades of marriage.

"A lot of people asked us what is the secret," Carolyn said. "It's love."

Earl smiles and nods his head in agreement.

"We've both always had the greatest respect for each other and the love has never died," Carolyn said. "I don't know how to describe it, but I've always loved him because he's brilliant."