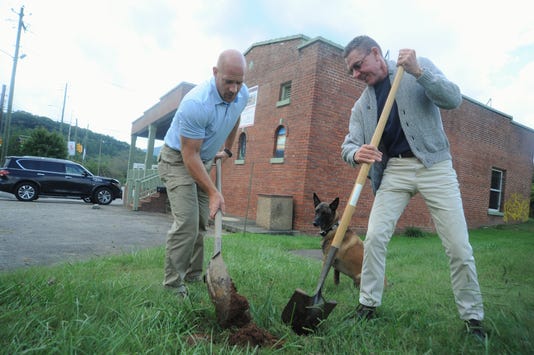 With the turn of a shovel earth was moved on Sept. 20, marking the beginning of a project that will transform Broadway Avenue once completed.

Known initially as Trestle Crossing and re-branded the “Railway Exchange,” the development will start with the renovation of a historic downtown building and culminate with the construction of a three-story mixed-use building on the west side of the busy thoroughfare.

Railway Exchange will be developed in two phases with the restoration of the former Black Mountain Ice Co. building at 128 Broadway Avenue starting in earnest in the coming weeks, according to St. Louis-based attorney and developer Joe Cordell.

“It’s been a longer and harder road than I thought it would be when I first decided to do this project,” Cordell said after breaking ground on the Railway Exchange.

Cordell purchased the building near the end of 2016 before buying the adjacent lot at 120 Broadway Avenue in April of the following year.

The brick structure was constructed in 1930 and is listed as a contributing building in Black Mountain’s historic district which is included in the National Register of Historic places. Most recently it housed the Gingko Tree Gallery, which closed in March of 2017. 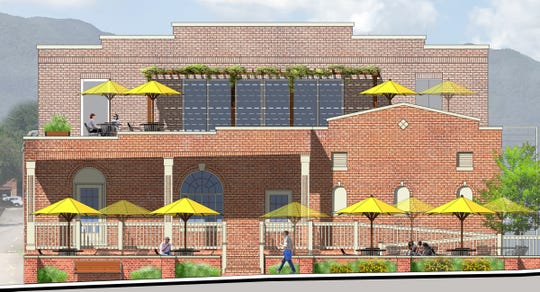 Originally known as Trestle Crossing, this image shows what the restaurant, which will be located at 128 Broadway Avenue, will look like when completed. The project, now known as Railway Exchange, is part of the larger development on the busy thoroughfare that will contain a three-story mixed-use building when completed. (Photo: SPECIAL TO BMN)

Hurt’s design converted the historic structure into a restaurant with rooftop dining and placed a mixed-use building with six individual retail spaces at the street level and 12 residential rental units on the two floors above, on the adjoining property. That .31-acre currently contains an open field and the building that was home to Dobra Tea Black Mountain for five years until it closed on July 1 of this year.

On Aug. 17, 2017, after a contentious three-hour meeting that included a packed board room and overflow room in town hall, the historic preservation commission denied the project the certificate of authenticity required to proceed by a vote of 3-2. Two of the board members who opposed the development stated the 40-foot building was too large in “size and scale” for the street, while one stated she would approve of the design if not for concerns about the proposed structure adjacent to the ice house.

Developers requested a rehearing and asked that one of the commissioners recuse herself, citing her husband’s status as an “affected party” as a conflict of interest. That request was denied and the matter was appealed to the zoning board of adjustments.

On Nov. 16, 2017, an overflow crowd of opponents and proponents of the development gathered in the town hall again as the ZBA gave the project a green light with all five members acknowledging they did not believe the HPC hearing in which the certificate was denied was a fair one.

“I feel now that we have a lot more community support,” Cordell said about the project nearly six months after receiving the official approval from the town. “I think the people who opposed it were a very vocal minority, and many of those have been won over now that they’ve become more familiar with the project.”

Cordell credits Hurt with a design that “has a great deal of respect for the history of the area.”

“I think this will be a destination for people in the larger Western North Carolina area to want to come shop and dine,” he said. “I think it will be a draw for people, who once they’re here, will want to do business in this town. Also, I think it’s a wonderful introduction to the community for people driving into town for the first time.”

The addition to the historic building will feature brickwork that matches the existing structure, Hurt said, but that portion of the building could potentially be removed with no impact on the original building. That section will include an elevator shaft that can take visitors to the roof.

Cordell anticipates the restaurant will be operational by April of 2019.

Black Mountain resident and commercial real estate broker Jason Burk is tasked with finding the right tenant for the property.

“This is an adaptive reuse of a beautiful, historic property,” he said. “This is what’s desirable for restaurants these days, especially local and independent restaurants.”

Cordell said his ideal occupant would be “special and draw people to this area.”

“It will be a destination,” Burk said. “The building has a lot of character and outdoor seating is incredibly desirable. This project has abundant outdoor seating, with a courtyard that will be right up against the street, porch seating and a rooftop terrace.”

The second phase of the project, a three-story building designed by Hurt to appear as a series of individual storefronts with residential spaces above, will begin next spring. He anticipates it will be completed in 2020.