Jim Griffin prepares to take the stage for "Visions of the Valley 2017," starring his own fourth grade Black Mountain Elementary class.(Photo: Fred McCormick)

It’s not easy to describe what Jim Griffin has done for the past 40 years.

In the simplest terms he’s a career educator who has spent the last 15 years teaching fourth grade in Black Mountain. However, to those who know “Mr. Griffin,” as many of the former students who still keep in touch with him to this day call him, he’s so much more.

Amy Bogan graduated from UNC Asheville in May with a degree in accounting. Before going on to become an all-conference pitcher for the Owen Warlassies, she was a student in Griffin’s class.

“He’s the kind of person who truly cares about all of his students,” said Bogan, one of many former students and other members of the community planning to attend a retirement celebration under the Lake Tomahawk Pavilion on Sunday, July 29.

While the event, which takes place from 1-4 p.m., will celebrate the career of Griffin, the money it raises will go to the Swannanoa Valley Christian Ministry’s “Hope for Tomorrow” program, which is based in Black Mountain and provides housing to homeless children and their mothers.

Jim Griffin works with a former student named Robert in his classroom at Black Mountain Elementary School. Griffin celebrates his retirement on July 29 at Lake Tomahawk. (Photo: SPECIAL TO BMN)

“That’s the kind of person he is,” Bogan said. "Of course he doesn't want his retirement to be about him because he's such a selfless person."

Griffin had a smile on his face every day, his former student recalled, and fostered an environment that was comfortable for the kids. But he was more than just a teacher, Bogan added, "he's more like a mentor, or a friend."

"We love Jim Griffin," said Frith, who taught three of her four children. "He's so close to our family I forget he didn't teach all four."

Among countless teachers who have come into the lives of her children, Griffin stands out, Frith said.

"He always cared so much about the kids he taught," she said. "He knew them all well and he knew how to reach them. He truly loved the kids."

One particularly caring gesture Frith recalls from the time her children spent with Griffin is the gingerbread man ornaments he would make for his students every year.

"They're gorgeous," she said. "We still hang them from our tree to this day."

Jim Griffin taught three of Beth Frith's four children in elementary school and the family still hangs the gingerbread men he made his students every year on their Christmas tree. (Photo: SPECIAL TO BMN)

"A lot of teachers kind of need that break away from the kids at lunch," she said. "But Jim was always happy to spend time with them, which I think really made them feel like they mattered."

Tammy Rouse, who was Tammy Bier when Griffin taught her fifth- and sixth-grade classes in North Miami, remembers that feeling.

"I moved from Montana to Miami after my mother passed away," Rouse said. "I had a really bad home life."

Rouse always felt safe in Griffin's class, among the vast assortment of animals he would keep there. She would often stay in his class after school and volunteer to take care of the animals. 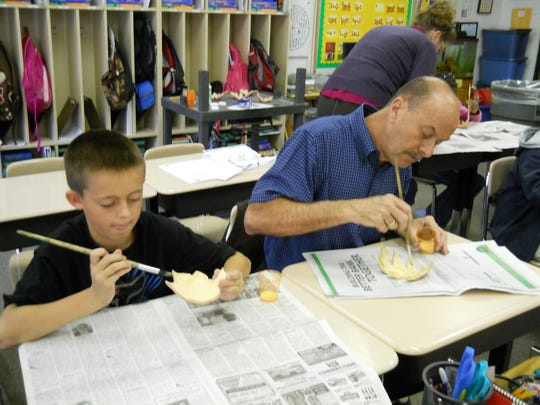 Jim Griffin, right, paints a leaf bowl alongside a former student at Black Mountain Elementary School, where Griffin taught for 15 years before retiring at the end of last year. (Photo: SPECIAL TO BMN)

"He never questioned why I was there or asked me to leave," she said. "He impacted my life at a fragile time and created a bridge to the path I'd take."

It was Griffin's compassion for all people and animals that left the biggest impression on Rouse, who turns 50 later this year.

"He's the kind of person a kid can look up to and try to be like," she said. "To this day I can't pass up an injured animal or not take care of children in need. I'm a foster mom and have been for 18 years. I've tried to follow the examples he set for me."

After 40 years in the classroom, Griffin's response to what he got out of his chosen profession is a simple one, he said.

"A warm heart," he said smiling. "When I see former students out and about, doing well, it makes me feel like 'I did something right.'"

"He was always so patient," she said. "And he would keep track of how I was doing well after I was in his class, which always meant a lot to me."

For Griffin, the idea of retirement is bittersweet.

"I never I'd be done teaching," he said. "But my wife and I want to spend this time together, while we still have our health."

He considers himself fortunate to have worked in a field that brought him joy and helped him connect with students, and their parents.

"We have some great parents and families right here in the Swannanoa Valley," he said. "I'm very lucky to have spent all these years here."