Subtropical storm Alberto unleashed a whole lot of inconvenience June 5 by cutting off the main road between Broad River and Hendersonville.

Crews clearing up a mudslide on N.C. 9 near Bat Cave are expected to have the road open by the end of July.(Photo: Matt Burkhartt/mburkhartt@citizentimes.com)

Each Sunday since the mudslide closed N.C. 9 near Bat Cave, Ken Rape and his wife, Louise, have left for church extra early. What used to be a 15-minute ride to Bald Mountain Baptist Church on Shumont Road is now an hourlong detour for the Edneyville resident, who preaches at the church.

That’s certainly better than the 90-minute detour they took right after the slide occurred June 5. The Rapes are among the many people on the Buncombe-Henderson county line who have had to find alternate routes to get from where they live to where they work or whatever.

RELATED: Clearing 9,100 dump truck loads will take until the end of July

When he heard about the slide, Rape knew where it was – about a mile north of U.S. 74-A, in the curve that Rape, who is blind, can feel is damp and shady. Going around the slide means he and Louise leave the house at 8:45 a.m. (they like to get to church for Sunday school). They settle in for the long way around, listening to vintage gospel music and spirituals on the way.

“I hope they get it fixed before football season,” Rape said, “so I can get home (from church) before the games.”

The $1.49 million road clearing and rebuilding project south of Black Mountain goes through the Broad River community to Bat Cave. N.C. 9 is – has been, anyway – the quickest route for motorists in Black Mountain to get to Lake Lure and Chimney Rock State Park, popular summer attractions. For those with a little extra time, the highway is probably the most picturesque way to get to Hendersonville. Many people who affected by the slide work there, or in Flat Rock or Lake Lure. 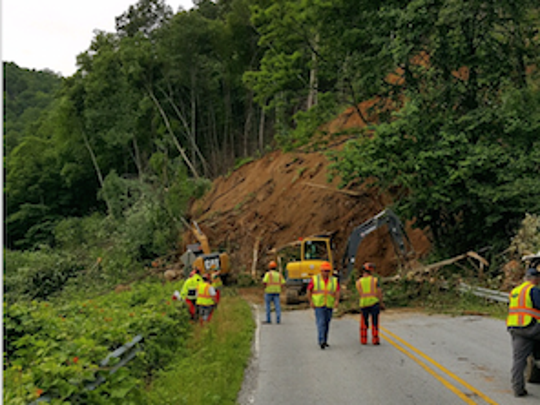 A DOT crew works to remove debris shortly after a mudslide covered a portion of N.C. June 5. (Photo: Courtesy N.C. Department of Transportation)

A lot of drivers are not heeding the traffic advisory sign in Black Mountain, Hayner said. Thinking that the roadblock is on the far side of Chimney Rock or Lake Lure, they have to turn around and come back to Black Mountain.

“We’re going around our ear to get to our elbow,” Nancy Brown said of the route she has to take to get her dogs at Full Moon Farm Wolfdog Sanctuary on the Broad River side of the slide to her veterinarian’s office in Flat Rock. Brown’s new route adds a half hour to her drive there, she said. The storm, which Brown said caused $5,000 worth of damage to her driveway, forced her — three times — to delay getting some pups to the vet’s office for their shots.

Volunteers from Brevard and Liberty, South Carolina, are putting in extra miles getting to the farm, she said. So will the South Carolina residents who have planned to come to the July 28 Howl-In, the farm’s monthly open house. Locals, for the most part, are making do, said Richard Barnwell, chief of the Bat Cave Fire Department.

“Mountain people have just learned to go with the flow, so to speak,” he said. “And when there’s nothing to do but deal with it, they have.” That includes many Bat Cave residents who work or go to church in and near Asheville, despite the detours being “very inconvenient,” he said.

Susie Gilliam of Broad River is using an alternative roads to make her weekly clinical visits to Pardee and Park Ridge hospitals in Henderson County, as well as to Rutherford Regional Hospital in Rutherfordton. Her new route to Rutherfordton adds only seven minutes to her 45-minute one-way drive. But the route toward Hendersonville – up N.C. 9 west onto Old Fort Road, then Cane Creek Road to Interstate 40, “a more rural route with a lot of direction changes,” she said - adds half an hour to what was already a 30-minute trip, she said.

“It’s long,” said Gilliam, who visits the hospitals on behalf of A-B Tech to make sure its students are learning what they should from the hospitals’ ultrasound and imaging employees. She sees a lot of traffic doing what she’s doing – putting in extra time on semi-familiar roads. A lot of them seem impatient. “All of us when we leave work, we want to be home as quick as possible,” she said. “They just want to get home.”

Robert White lives in Bat Cave and works for Broad River Fire & Rescue. His drive to work used to take 20 minutes. Now it’s about an hour. He has to leave by 7 a.m. to make sure he’s at work by 8 o’clock.

He doesn’t mind so much, crediting his tolerance for the unexpected to the more than 20 years he spent in the Army. White sees a lot more traffic on the road – something he says is related not only to the mudslide but also to tourists coming down N.C. 9 from Black Mountain on their way to Chimney Rock and Lake Lure.

Imagine driving all that way, over curvy, unfamiliar roads, only to have to turn around and come all the way back to make a big, long detour. “They’re coming all the way down to the roadblock and getting frustrated,” he said.

The slide has cut into the Straightaway Café’s business in Broad River, according to Vance McGraw. He lives in Bat Cave, and it use to take him 15 minutes to get there. Now it’s an hour, if he’s so inclined, which he’s not, not until the road is open again.

“The Straightaway Café is a hidden gem, with really good food. My grandmother, dad go every weekend. My neighbor too,” said McGraw, an accounts manager for a business that repairs patient monitoring equipment. “But since the slide, I don’t think any of us have been. We can’t justify going an hour the other way around the mountain.”

Straightaway Café co-owner Ray Botham said the restaurant had lost about half its daytime visitors since the slide. The restaurant attracts lots of motorcyclists, car club enthusiasts and visitors to Chimney Rock State Park, but few if any have come through recently, he said.

Something good may come out of all this inconvenience – the dirt. The Broad River Fire Department has leased a spot for a new substation and needs fill dirt to build upon. It has asked the state for the slide dirt, and if it gets it, the department would save about $8,000-$10,000, Hayner said.