Community set to honor Ruth Penland as she turns 100

Community set to honor Ruth Penland as she turns 100

Weeks before her 100th birthday, Ruth Penland stands outside of the funeral home she opened in Swannanoa with her late husband George in 1976. Swannanoa First Baptist Church, which will be the site of her birthday celebration on Saturday, June 23, is right behind her.(Photo: Fred McCormick)

Most people would consider themselves fortunate to see their 100th birthday. Even more would consider it the icing on the cake if they were still able to do the job they love.

If 400 people showed up in honor of your celebration, you would know what it’s like to be Ruth Penland.

The longtime Swannanoa resident, who lives next to the funeral home that has employed four generations of her family, will be the guest of honor at Swannanoa First Baptist Church on Saturday, June 23, four days after her birthday. 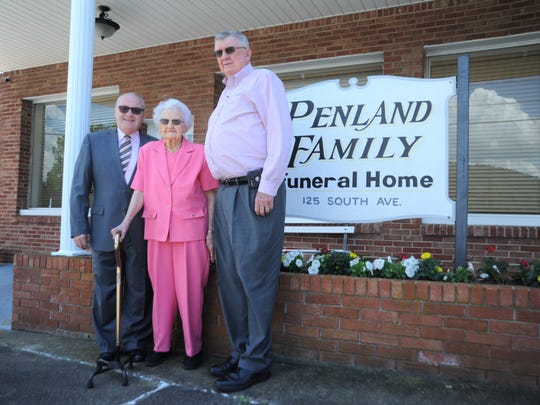 Penland, who was the salutatorian of her 1935 Hayesville High School class, was born in Clay County and moved to Buncombe in 1959 with her late husband and childhood sweetheart, George. The couple sold their dairy farm and headed east to pursue the kind of opportunity that couldn’t be found around Hayesville back then.

“We had three or four businesses we ran ourselves,” said Ruth, who opened the first Penland and Sons Funeral Home with George in Asheville in 1970. “We had a poultry business, and it was booming out there in Clay County. And then it kind of slacked off.”

Like many others on the far western end of the state at that time, Ruth and George sought to create a future for their three sons.

“When the kids would graduate from high school out that way, they had to either go to Atlanta or Asheville to find jobs,” she said. “And it’s still like that.”

The Penlands found work in Buncombe County, where Ruth had family. She went to work for Gerber’s baby food plant in Asheville, and George found a position at Beacon Manufacturing in Swannanoa. Ruth later worked for 15 years as the supervisor of admissions for Memorial Mission Hospital. Her husband got a job with a funeral home, a choice that would lead them in a new direction.

“My first cousin and her husband bought Berryman Funeral Home in Asheville, and she didn’t like the way the people had been running it,” Ruth said. “They called us and wanted us to move into the funeral home and manage it, and we did that in 1963.”

The experience was a new one for the Penlands, who were novices in the business. However, just a few years later they bought the business and put their family name on it. They added a second location in 1976 in the heart of a thriving Swannanoa, where Ruth has been a fixture since.

“This was an old Western Auto store,” Ruth said of the building that she and her husband moved the business to after a fire destroyed the Asheville location in 1986.

Her son Jim, who bought the funeral home from his mother with his nephew Jason in 2012 and changed the name to Penland Family Funeral Home, recalled how much Swannanoa has changed since his parents first opened the doors.

“This was a bustling little town,” he said. “Beacon was here, and you had a lot of stores, beauty salons and all kinds of businesses.”

Ruth and George provided an important service to those in the busy community and came to know countless people over the years. They built something that’s “more than a business,” said Penland’s manager Charles Graves, who first met the couple in 1990. “You couldn’t find two more honest people than George and Ruth Penland,” he said.

They were like family to Graves from the moment he met them. “I remember the first time I ever met Ruth,” he said. “I fell in love with them from the moment I met them because they were such good, down-to-earth people.”

Ruth and George, who passed away in 2001, taught Graves to can beans, he said, and would regularly invite him to their home next to the funeral home for dinner. Ruth still lives in the home.

"George used to cook breakfast, and Charles would come by and eat breakfast with us," said Ruth, who lovingly refers to Graves as her "adopted son."

"That's right, on Friday mornings," Graves said with a smile.

It's that ability to make everyone feel welcome that helped the Penlands build a reputation for treating people the way they should be treated, which the funeral home still does today, Jim Penland said.

“We serve the public, but we’re family-oriented and that makes people come back,” he said. “We try to make people feel like family.”

In fact, "family" is the key to the entire operation, said Ruth, who never considered giving up the business after the death of her husband. She continued to work there after her son Joe, who ran it for years, passed away in 2014. Her son Jerry died in 2005.

Ruth, who still comes to work and lives by herself, still has a valid driver's license and has now been a licensed funeral director for 52 years. She proudly points out that her great-grandson is the fourth generation of Penlands to be involved in the family business.

"People have tried to buy us out, but this is a family operation," she said with pride.

Ruth has a lot to be proud of today, as the Penland name is a well-known one in the Swannanoa Valley. Her grandson Anthony Penland is the fire chief in Swannanoa and was named chief of the year in 2015.  Black Mountain deputy fire chief John Wilson is married to her granddaughter. She's happy that she and George made the decision to move east.

"I'm proud that all my grandkids and great-grandkids have good jobs," she said. "Sometimes I wonder if I had stayed in Hayesville what would have happened."

What she won't have to wonder soon is how the community she's called home for most of her life feels about her - at 2 p.m. Saturday, June 23, some 400 guests are coming to celebrate her 100th birthday with her, her son said.

That feeling is best described in one of two words, according to Graves.

"Mama, or grandmama," he said when asked the first word that comes to mind when he hears her name.