Black Mountain police sergeant Chris Staton stands receives a round of applause on May 14 after the department's chief read a narrative of his efforts to revive an overdose victim in March.(Photo: Fred McCormick)

There wasn’t much time to react that Wednesday afternoon in March. A pickup truck was barreling toward Sgt. Chris Staton in an empty parking lot on Blue Ridge Road.

The driver braked to a stop in front of the Black Mountain police officer. A woman in the truck had overdosed on oxycodone and alcohol, the driver told him.

Staton looked at the passenger, whose face had turned dark blue. With little time to think, he reached for an EVZIO Auto-Injector to administer naloxone, which blocks the effects of opioids.

Staton injected the woman. Immediately her breathing improved. But within seconds, she relapsed.

Another Black Mountain police officer pulled up, and Staton ran to get the officer's auto-injector. This time the woman came back, for good. 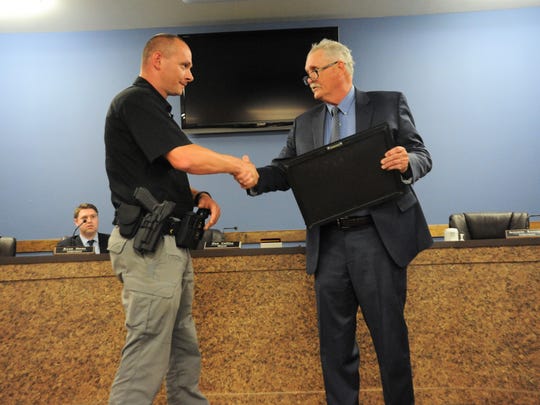 Sergeant Chris Staton is presented with a certificate recognizing his life-saving actions in March by mayor Don Collins on May 14. (Photo: Fred McCormick)

On May 14, Black Mountain's mayor and aldermen recognized the 14-year law enforcement veteran's actions with a certificate acknowledging him for saving a life. Police Chief Shawn Freeman presented Staton with a medal, to be worn on his uniform, signifying he saved a life while on duty.

Staton, who joined the Black Mountain force in 2006, said he was merely relying on his training. Dealing with overdoses has become increasingly common for police as communities across the country find themselves in the grip of the opioid crisis.

“I’ve been in several situations," Staton said in a recent interview, "where I’ve witnessed someone suffering from the effects of an opioid overdose,” he said. “This particular situation was unique because I was being approached for help and fortunately had the knowledge, training and resources to administer help.

“In this situation, I’m working on assessing the subject. But I’m also trying to gather as much information as possible about what is happening. That way, when the medics arrive I can advise them of what is going on so they can treat the person.”

To Staton, who for a few vital minutes was the only person on the scene, “it was obvious that there was something major going on.”

Staton had the EVZIO Auto-Injector thanks to Project Lazarus, a nonprofit organization created in 2007 to address the opioid epidemic in Wilkes County at a time when the county in northwest North Carolina had one of the highest overdose mortality rates in the nation.

The organization's multifaceted approach to combating the effects of the epidemic includes a program that equips first responders, like police officers, with naloxone kits.

As Staton opened his injector that day in March, it began audibly communicating with him, a feature of the machine. It was a welcome sound in a hectic moment in time, he said.

“In law enforcement we spend countless hours training for the ‘what if’ situations,” he said. “I attended a training on how to use this device, but that audible reminder of the injector talking you through the steps was nice to have.”

Soon after the woman began to breathe again, firefighters and emergency medical technicians arrived on the scene. They were able to stabilize her. 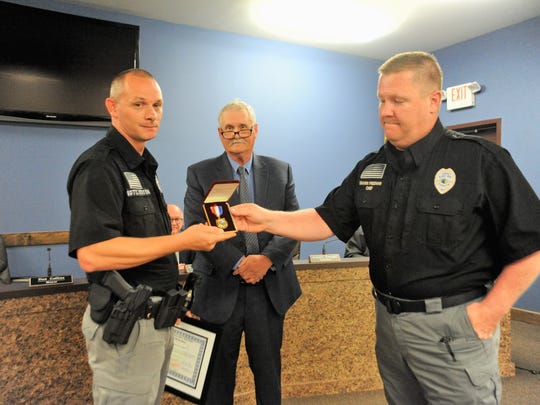 “Before leaving the scene, (EMTs) approached Sgt. Staton and advised him that he saved the life of this patient by administering naloxone,” Freeman told aldermen and the public May 14. “Several days later we had a visitor at the station.”

The driver of the truck came to thank Staton for his response, and to let him know that the woman was receiving the help she needed.

The naloxone and injector did exactly what they were supposed to do. Project Lazarus provided it to the department for free; otherwise, the cost can be prohibitive, Freeman said. Project Lazarus provides thousands of doses of naloxone, as well as the kits used to administer them, throughout the state, according to founder and president Fred Bason.

"This puts the life-saving medication for someone suffering from an overdose in the hands of the front line," he said. "That's why we try to equip first responders with it as often as possible, or at least direct them to where they can obtain naloxone."

Education and intervention are also offered through Project Lazarus, according to program director Donna Parks Hill.

“We do a lot of education in the schools, as well as intervention work with kids who are at risk,” she said. “We also speak to other agencies and organizations and do education work in the community on things like the importance of properly securing medication and properly disposing of it.”

Throughout the state, Project Lazarus provides lock boxes for the safe disposal of prescription drugs, including one in the Black Mountain Police Department lobby. Through the work of a state-certified peer support specialist, the Lazarus Recovery Services program works with people in recovery or seeking recovery, Hill said.

Staton is grateful to the Lazarus Project, without which "I don't know if our department could afford to have access to (naxolone)," he said. He is even more thankful, however, that he had the equipment and the ability to respond in a crisis.

"Being a police officer, it's not every day that we have the opportunity to help someone as significantly as this," he said. "When I reflect back, I'm able to say that training really paid off."