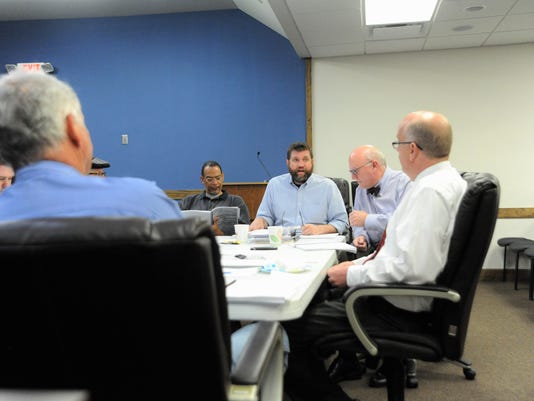 Town manager Matt Settlemyer goes over his recommended 2018-19 budget with elected officials at a workshop on April 19.(Photo: Fred McCormick)

Since 2011, the town of Black Mountain has reduced its debt by $1 million and increased its savings by $1 million, aldermen were told April 19 during their first look at the 2018-19 town budget proposal.

Town manager Matt Settlemyer presented the first draft of the $11 million budget to the mayor and the board of aldermen. The elected leaders will respond to it in a workshop April 30.

“The total budget is down .9 percent, and here’s why I think that is,” he said. “One of the issues here is on the revenue side. Our sales and franchise taxes have started to flatten out, and we don’t see the growth in our property tax the way that we see it on the streets.”

During the current fiscal year, the town paid off the debt on the town pool. It also bought, for $2 million, the former piece goods store at  304 Black Mountain Ave., for the town's public works and recreation departments (the town financed $1.5 million to buy the property). Those two developments mean fiscal year 2017-18 was "not a typical year," Settlemyer said.

“With that being said, I do think that we’ve been able to get a lot done,” he said. “Since 2011 our fund balance went from a little over $3 million, as of last year, to over $4.5 million. So we have been able to save money in what is basically our savings account.”

The $8.7 million general fund - some 79 percent of the recommended budget - is down 1.8 percent from 2017-18. The upcoming fiscal year will be a big one for capital investments, in terms of improvements and equipment, the town manager said.

"Obviously that's not all town money. There's grant money involved in those too," Settlemyer said.

Phase two of the Riverwalk Greenway is the largest capital project proposed in this year's budget. In March, aldermen voted unanimously to seek an additional $1.8 million in federal funds from the French Broad Metropolitan Planning Organization. The grant, which requires the town to match 20 percent, or $450,000, would compress the timeline for a project that will ultimately connect The Oaks Greenway at the end of Vance Avenue to the Flat Creek Greenway behind Black Mountain Primary School.

The prioritization subcommittee of the French Broad MPO recently recommended the project for the grant, according to Settlemyer. The matter has yet to be heard by the full MPO board, however.

The budget presented by the town manager continues to allocate that money and states that the town will continue to work to secure additional grant money for the project.

Also included in the recommended budget is a $35,000 circulation and transportation study. The study is likely to start in the fall, and $28,000 of it is being funded by the MPO. Aldermen decided to press ahead immediately with a study on Cherry Street, now that work on sewer and water lines there is complete.

"MSD will say that if we want those roads striped that they'll stripe them one time," he said. "So since the striping will not 'time out' with the transportation and circulation study, the question for the board is when to have that done."

Merchants on Cherry Street, several of whom attended the budget workshop, "do not want to have it striped the way it was and then have a study say it needs to be done another way," mayor Don Collins said.

Alderman Larry Harris moved to have Waynesville-based J.M. Teague Engineering do a study of Cherry Street, to determine if it should be converted into a one-way street. The motion was unanimously approved.

An upgrade to the Black Mountain Police Department's communication system, which would take place during the upcoming fiscal year, was also discussed.

"We're moving to what's called VIPER (Voice Interoperability Plan for Emergency Responders)," police chief Shawn Freeman said. "It's a system that lets first responders communicate with each other no matter where they are."

Black Mountain is the only law enforcement agency in Buncombe County not using VIPER, he said. Freeman explained why the technology is needed by talking about the Black Mountain Police Department's assistance in a February chase on Interstate 40.

"As soon as we crossed the mountain, we lost all communication with our communication center," he said. "This (funding) would put a VIPER tower on our ceiling that would interact with other towers around the area, enabling us to communicate with other agencies."

Updating the system requires no funding in the upcoming budget, but would require a commitment beyond that.

"Through a lot of negotiation and hard work, (Freeman) figured out a way we could have (the VIPER system) functional in six months. But we would pay for it over the next three years," Dean Luebbe, assistant town manager and finance director, said. "We don't even need to budget anything in the next budget, but we would need everyone's knowledge and blessing."