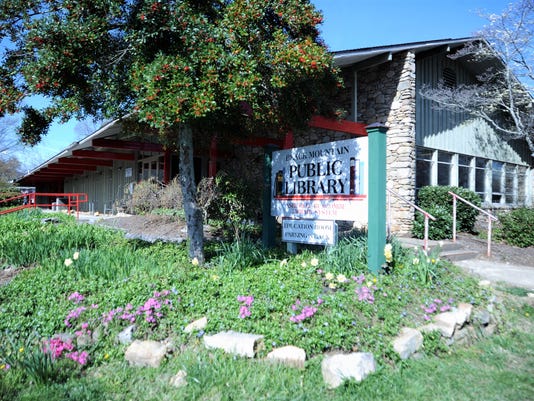 The Black Mountain Library opened its doors on North Dougherty Street on April 28, 1968 and remains an important cultural institution to this day.(Photo: Fred McCormick)

April 28 will be a lot like any other Saturday at the Black Mountain Public Library. Scores of people will visit the building exploring its 40,000-plus items. They'll take advantage of the free internet access or peruse its offering of periodicals.

Only a few will realize just how significant the day is. The date marks 50 years - to the day - since the building opened its doors to the community.

The library has been in its current location since 1968, but it began in 1922 in a room at Black Mountain Presbyterian Church. There, the Rev. Harry Boehme provided 50 kids books for public use. Edith Sloan volunteered to tend to them.

Community support for the library was strong from the beginning, according to Tom Stiles, a volunteer for the Friends of the Black Mountain Library. Stiles began researching the history of the library when he learned that the building would be turning 50. He looked at the 1925 municipal election in which a referendum regarding the use of public funding to support the growing library was on the ballot.

“The citizens of the town voted 166-11 to support the library with tax revenue,” Stiles said. “I would say that’s an overwhelming show of support.”

In fact, Stiles found that the community consistently backed the library. By 1933, when it moved from Cherry Street into the city hall (then on State Street), the library had increased its collection to more than 4,600 books. Thirty years later the library had more than 10,000 books. Three hundred and fourteen members formed the Friends of the Black Mountain Library to raise money for the construction of a dedicated building library. 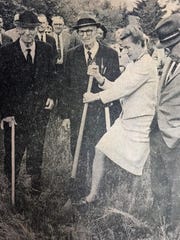 The late Mary Elizabeth “Betty” Tyson, who in 1946 opened Black Mountain’s Tyson Furniture with her late husband Alfred Forbes “Bub” Tyson, was the organization’s chair in 1963. Betty Tyson, who moved to Black Mountain from Florida in the 1930s, was the driving force behind the push to secure a permanent home for the library. Her son, Joe Tyson, who took over the family business in 1974, recalled the motivation behind her efforts to raise money for the building.

Once again, a willing community was there to meet the library's needs. More than 400 people contributed to the building fund.

The Asheville Federal Savings and Loan Association donated a portion of the property for the 6,100-square-foot structure. In a ceremony on May 8, 1967, Betty Tyson turned over the first shovel of dirt.

"She was really proud of the work she did with that building," Joe said. "She really wanted it to be a true cultural center in Black Mountain."

To that end, well-known Asheville architect Anthony Lord was contracted to design the building, which was completed less than a year later. Before the building could be opened to the public, the vast collection had to be moved from State Street to its current location on North Dougherty Street.

Of course, the community was again there to lend a hand.

A Tyson Furniture truck shuttled books to the new building. Local children unloaded them and placed them on the appropriate shelves. Teenagers carried stacks of books across State Street, according to The Asheville Citizen Times.

A gala to dedicate Black Mountain's modern library was held April 28, 1968 and attended by more than 350 people. Alfred Tyson, the town's vice mayor at the time, accepted the building on behalf of the town.

In 1994 the town rededicated the building as the Alfred Forbes and Mary Elizabeth Tyson Library. It is often referred to as the Black Mountain-Tyson Library to this day.

The vision of Betty Tyson and countless others who worked to establish a cultural center in the town is alive and well today, according to Melisa Pressley, the branch manager for the library. The branch's collection of books continues to grow, but the library offers much more, she said.

"We're much more technology-driven these days," she said. "That's created a whole new opportunity for patronage that didn't exist before. We help people learn how to use computers, their electronic devices and even apply for jobs."

While Black Mountain's library maintains its devotion to books, it still functions much like a "window to the world," welcoming more than 7,000 patrons monthly, according to Pressley. The building, which was expanded in 1981, continues to serve its original purpose, making the 50-year milestone a significant one.

For Joe Tyson, whose family has been in Black Mountain for hundreds of years, the building named after his parents has a special place in his heart.

"That's very much my mother's legacy," he said. "She worked hard for that building to become a reality."