Andrew Brunson, an American pastor, stands in Izmir, Turkey, in this file photo. Brunson has been charged in Turkey with engaging in espionage and having links to terror groups, crimes that carry a potential sentence of up to 35 years in prison.(Photo: AP)

“Pastor Brunson is strengthened by his love for his family and his faith in God, but his health has deteriorated," Tillis said in a statement. "He has lost 50 pounds and spends 24 hours a day in a cell with limited human contact.  He is attempting to visit a doctor this week, which involves him being handcuffed and transported with several armed guards. He fears the possibility that the American government accepts the indictment and forgets about him, which we will not allow to happen.

A Turkish court last week approved an indictment against Black Mountain native Andrew Brunson, clearing the way for a trial that could result in his being imprisoned in that country for up to 35 years.

Brunson, a 50-year-old Christian missionary held by the Turkish government for a year and a half, could be tried as early as April 16, according to the American Center for Law and Justice, a Christian group that advocates for Christian rights and conservative positions on social issues. The Washington, D.C.-based organization is leading a legal effort to win Brunson’s release. 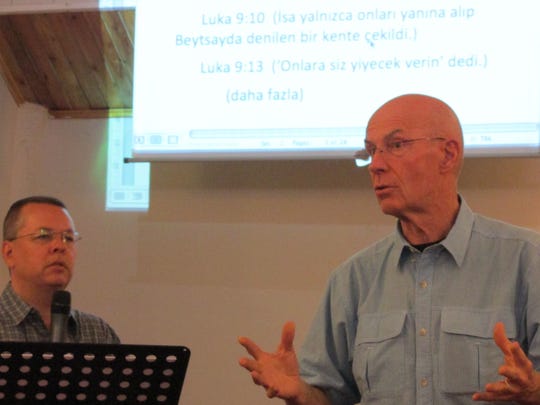 The Rev. Andrew Brunson, left, translates, as John Sullivan speaks at Resurrection Church in Izmir, Turkey, in 2014. Sullivan was one of eight members of Christ Community Church in Montreat who visited Izmir in 2014. (Photo: Courtesy Ann Johnson)

The Turkish-run Anadolu Agency news agency reported on March 17 that Turkish prosecutors have recommended an indictment that accuses Brunson of “committing crimes on behalf of terrorist organizations.” The indictment, prepared by the Public Prosecutor’s Office in the Aegean province of Izmir, asks that he be imprisoned for up to 35 years. The court – the province’s Second High Penal Court – accepted the indictment March 16, according to the news agency, moving Brunson’s case to trial.

At the time of his Dec. 9, 2016 arrest, Brunson, the son of missionaries, had been leading a small church in Izmir, in Turkey’s southwestern corner, for 23 years. The Black Mountain native was initially charged with belonging to a terrorist organization. In August 2017, Turkey added charges of “gathering state secrets for espionage, attempting to overthrow the Turkish parliament and government and to change the constitutional order,” according to a Wall Street Journal article.

Brunson was arrested in Izmir, accused of committing crimes on behalf of the PKK terror group (the outlawed Kurdistan Workers’ Party) and the Fetullah Terrorist Organization, “a group behind the defeated coup attempt July 15, 2016” to dislodge Turkish president Recep Tayyip Erdogan, according to the news agency.

“Brunson is accused of carrying out espionage and organizational activities across Turkey under the guise of missionary operations, being linked to FETO and PKK members, and interfering into Turkey’s internal affairs,” the news agency reported. “The indictment said Brunson was allegedly involved in converting Kurds to Christianity and aiming to establish a Kurdish state for them.” It also alleges that Brunson knew about a possible coup prior to the July 2016 coup.

The Black Mountain News last week was unable to obtain a copy of the indictment against Brunson. The American Center for Law and Justice has a copy, but its attorney hadn’t authorized its release last week, said CeCe Heil, its executive senior counsel. The allegations in it are bogus, she said.

Heil said the ACLJ will help Brunson’s privately retained attorney in Turkey get ready for trial. But she’s not optimistic.

“We feel that this case has been fabricated, so we’re not assuming that Pastor Brunson will get a fair trial. But we want to do everything we can to assist his attorney and to continue to bring this to the attention of this (Trump) administration and the State Department so they can reach out on behalf of Pastor Brunson as well.”

On an Andrew and Norine Brunson Facebook page, a March 18 post attributed to Andrew Brunson the week before states, “To the extent that I am known, I want to be known as a servant and lover of Jesus Christ. I have prayed for this land and its people for many years, for God to pour out great blessing. In my weakness, I pray daily for strength and courage to persevere and remain faithful to my King until the end. My deepest thanks to my family around the world that is standing with and praying for me.”

Erdogan has made Brunson’s possible deportation contingent on Washington agreeing to extradite Gulen to Turkey. “Give him (Gulen) to us, and we will try (Brunson) and return him,” Erdogan said last year. Gulen, who denies involvement in the coup attempt, lives in Pennsylvania.