Feb. 15 Obituaries of the Swannanoa Valley

Obituaries of people with connections to the Swannanoa Valley

Feb. 15 Obituaries of the Swannanoa Valley

The great love of Sam’s life was Nancy Wallace Hope, whom he first met when they were young teenagers. They married in 1953. While raising their three sons, Sam and Nancy dedicated their lives to helping others: working with the Civil Rights movement starting in Richmond in the mid-1950s, volunteering internationally to spread justice and peace, and preserving the natural habitat of their beloved Montreat. Sam started his professional ministry as the founding minister of the Covenant Presbyterian Church in Roanoke, VA, in 1957. In 1961, he became the founding minister of Forest Hills Presbyterian Church in High Point, NC. In 1966, Sam and Nancy felt called to continue his ministry in Saigon, Vietnam, where Sam served as Director of Personnel for Vietnam Christian Service and Nancy did volunteer work with American soldiers and with Vietnamese civilians afflicted with leprosy.

In 1968, Sam became a director for the Presbyterian Board of World Missions in Nashville, TN, and then the Associate Minister at Preston Hollow Presbyterian Church in Dallas, TX, from 1971-1974. He was Senior Minister of First Presbyterian Church in Durham, NC, from 1974-1979 and then left to take on the role of Director of the Montreal Conference Center. When he left that position in 1984, he spent much time in Nicaragua as a member of Witness for Peace during the Contra War, becoming a director of the organization in the DC office, then Development Director in the Durham, NC, office. His next adventure was to start and manage One World Market in Durham, a non-profit store devoted to the mission of fair trade by selling handmade crafts from impoverished regions of the world, eventually working with the organization Ten Thousand Villages.

Sam and Nancy moved back to Montreat in 1996 for a “retirement” of more nonstop community involvement. Sam continued to get himself arrested when he felt it was for a just cause and to travel the world as a volunteer in more than 80 countries, while also helping to preserve thousands of acres of wilderness in Montreat and helping to create the Walk Jones Wildlife Sanctuary and, with his son, Beau, the Bridge of Hope.

Focusing on Sam’s wide and deep intellect, religious devotion, and relentless work to help others leaves out that he was also a lot of fun and a joy to be with. He loved dogs beyond all reason, he loved to laugh and to make others laugh, and he never took himself too seriously. An accomplished life-long tennis and golf player, Sam, along with Nancy, had profound, lasting, and meaningful friendships with people of all races and all walks of life. He touched countless lives around the world and was as open and warm as a human can be. Sam spent the last years of his 65-year marriage devotedly taking care of Nancy as her health has declined. He passed peacefully in a bed beside her bed, after they told each other they loved each other and fell asleep.

Along with his wife, Nancy, Sam is survived by sons Beau Hope of Black Mountain, David Hope of Greensboro, and Robert Hope of Montreat; grandchildren Sam, Charlotte Ann, Hannah, Carleigh, Sarah, and Molly; and great grandchildren Owen and Wren, along with numerous cousins, nieces and nephews, and a large extended family. The family would like to thank all the caregivers who have tended to and helped Sam and Nancy and have become part of the family.

A funeral service will be held at 2 p.m. on Saturday, February 17, 2018 at the Black Mountain Presbyterian Church at 117 Montreat Rd, Black Mountain, NC 28711. In lieu of flowers, the family requests that you donate to www.bountyandsoul.org or www.bmpcnc.org. The family would also appreciate it if friends would write and share memories of Sam: PO Box 1264, Montreat, NC 28757.

Paul enlisted in the U.S. Marines after the 10th grade of high school. He served his country in Puerto Rico as an MP. He was honorably discharged three years later. Following his time in the service, he returned to Black Mountain to finish high school. It was there he met the love of his life, Joyce Silvers.

Paul attended Berea College in Kentucky on the GI Bill, while Joyce went to Wake Forest.
Three years later they married and transferred to the University of Tennessee in Knoxville. After receiving his undergraduate degree, Paul headed north to Michigan State for his Masters.

His professional career began in 1957 when he worked for the Kroger Food Co. in Atlanta, GA. For the next 11 years, Paul was promoted and eventually ended up in Birmingham, AL.
In 1971, he took the chance on a small grocery store chain as Vice President. That company was Bruno's. During his tenure at Bruno's, they acquired Piggly Wiggly in southern Georgia, based in Vidalia. He was made president of that division. Paul returned to Birmingham and in 1991 he became president and chief operations officer of Bruno's Inc. He retired in 1996.

Paul was a long-time member of Green Valley Baptist Church in Hoover, AL. When he wasn't working, Paul escaped with Joyce to one of his favorite places, Black Mountain, where they had their second home. He loved golfing, vegetable gardening, and after retirement his weekly meetings at Waffle House with his friends from Bruno's. But his greatest joy was spending time with his sweetheart, Joyce, his children, and grandchildren.

Paul is survived by his wife, Joyce Silvers Garrison; sons, Phillip Garrison (Jackie) of Black Mountain, NC, and Jim Garrison (Kaye) of Vestavia Hills, AL; grandchildren, Miranda Garrison of New York, NY, Paul Garrison of Baton Rouge, LA, and Bradley Garrison (Alexandra) of Charleston, SC; step-grandchildren, Blake Campbell (Dena) of Marietta, GA, and Scott Campbell of Hoover, AL; great-grandchild, Millie Campbell; and a host of nieces and nephews who loved and adored their uncle.Visitation was noon to 1 p.m. on Thursday, Feb. 8, 2018 at Ridout's Southern Heritage Funeral Home in Pelham, AL, followed by the funeral service at Ridout's Southern Heritage Chapel, Pelham. Burial was at Southern Heritage Cemetery, Pelham. In lieu of flowers, memorial gifts may be made to the Salvation Army, salvationarmyusa.org.

Mrs. Sneed was born May 10, 1922 in Erwin, TN to the late Horace G. and Carrie Craine Blankenship.  She lived most of her life in Buncombe County. In addition to her parents, she is preceded in death by her husband, John T. Sneed; sister, Lydia Riddle; and brothers, Odie, Murphy, and Hartsel Blankenship.

Douglas Roy Moseman passed away peacefully at his home in Pasadena, CA on Saturday, January 27, 2018 surrounded in love by his partner and other family members. Formerly from Black Mountain, NC, he was born on March 8, 1953 and was the son of the late Douglas Bernard Moseman and Alice Moseman Barnwell.
He is survived by his partner of 23 years, Van Woodcock; two brothers, Edward Moseman, Tony Moseman (Patricia); two sisters, Kathy Settle (Ronnie) and Karen Davis (Robert); many nieces, nephews, cousins and two special aunts, Shirley and Martha Raines. Doug was a light for all who knew him, always bringing happiness and laughter to all situations. He loved his family and the life he and Van made together in California very much. He will be lovingly missed.
Doug was a graduate of Charles D. Owen High School in Black Mountain, NC and he received his degree in Hotel Management at A-B Tech and spent the last 25 years as a sales executive in the home and decorative accessories industry.
A Celebration of Life service is planned for Sunday, February 25, 2018 from 3-5 p.m. at the Black Mountain Bistro, 203 E. State Street, Black Mountain, NC.  In lieu of flowers, memorials may be made to your favorite animal rescue organization. Harwood Home for Funerals is assisting the family. 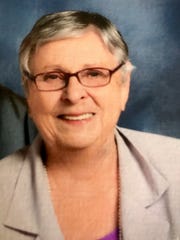 She was born February 18, 1933 in Petersburg, IL. Pat will forever be remembered as a profoundly kind, intelligent, funny and spirited friend. She was a dedicated daughter, sister, wife, mother, grandmother, great-grandmother and Gigi.

Pat spent her life in service of others alongside her husband and best friend Ronald Arthur Botsford. Their marriage spanned 60 years, 17 moves and has been an inspiration to all who have known them together. Many of her days were spent trying to keep Ron out of too much trouble and curbing some of his many pursuits. Above all things, theirs has been a marriage filled with love.

She lived a life filled with travel, service, gardening, music, and family.  She was a passionate believer in leaving the earth better than you found it. She recycled before it was cool, and served on the Earth Care Congregation Committee at Black Mountain Presbyterian.

Pat’s wonderful life was celebrated Saturday, February 10th, 2018 at 4 p.m. Services will be held at Black Mountain Presbyterian Church and family will receive visitors after the service in the Narthex.   Please wear purple, Pat’s favorite color.

In lieu of flowers Pat would have loved for donations to be made in her memory to: SVCM Hope for Tomorrow, PO Box 235, Black Mountain, NC 28711. Harwood Home for Funerals is assisting the family.

Harold D. (“Hal”) Kreisel of Swannanoa, NC died of cancer on February 8, 2018. He was 87 years old. He is survived by his wife of 59 years, Carolanna; two daughters, Deanna of Vancouver, BC and Lori of Arden, NC; his grandson, Duncan; and his brother, Lyn of Bluffton, SC.

Hal was born and raised on a farm in upstate New York, graduated from Cornell University in 1952, and is an Army veteran of the Korean War period.

He made his living in the equipment leasing business with various banking institutions and lastly owned and operated his own small investment banking firm, Leasing Funds, Inc., in Philadelphia and Hilton Head Island before retiring to the Asheville area in 1993.

Burial will be at the Western Carolina State Veterans Cemetery in Black Mountain following a private service. Harwood Home for Funerals is assisting the family.