On Jan. 27, the Swannanoa Valley Museum will lead a mostly downhill, four-mile hike down the path that led travelers into Western North Carolina.

The old stagecoach road beside Swannanoa Creek near Black Mountain has played a large role in the region's history.(Photo: Joe Standaert)

On Saturday, Jan. 27, the Swannanoa Valley Museum & History Center will lead a moderate-to-difficult, mostly downhill, four-mile hike down the path that led many travelers into Western North Carolina.  The hike will shed light on the natural, social and cultural history of this once major artery along the Swannnaoa Creek into the Blue Ridge and crossroads for tourism, commerce and calamity.

At the close of the Civil War, the thoroughfare played a critical role in the defense of the region. During Stoneman’s Raid, Confederate troops using an ingenious and surprisingly simple diversion were able to prevent the Union army from using the route to get to Asheville. Participants will hear the full tale as they walk the same route used by the troops more than 150 years earlier.

Near the road lies a mysterious gravestone related to the skirmish. The grave’s occupant is unknown, and Confederate veterans told two conflicting versions of the story that museum historians will share when hikers reach the site. The gravestone, marked soberly “U.S. Soldier,” is visible alongside the creek, sometimes marked with Confederate flags and Old Glory.

Despite the solemnity and mystery enveloping the creek side, during much of the 18th century the Swannanoa Creek formed the backbone of the burgeoning Western Turnpike, the main pathway in WNC. Starting in 1820, a stagecoach line ran along the road from Morganton to Old Fort and then up the mountain along the stream to Black Mountain.

The museum hike will follow the old kudzu-covered stagecoach road eastward. Writer Christian Reid described the stagecoach ride up the Swannanoa Creek to “The Land of the Sky” in her 1876 book of the same title. The name has hence been appropriated as a regional tourism slogan.

During the height of stagecoach travel, residences and lodging facilities sprang up along the roadbed. The ruins of several home sites remain along the historic path, including the remnants of the chimney of the early 19th century Allison cabin, visible during the museum’s hike. 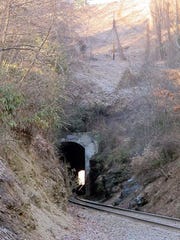 Trains have been running through Swannanoa Tunnel since the late 1800s. (Photo: Joe Standaert)

By the end of the 1870s after new-fangled nitroglycerin blasted through the 1,800-foot Swannanoa Tunnel, the stagecoach was displaced by the railroad, which united the eastern and western portions of the state. The railroad was a feat to construct, taking many lives in the process, including hundreds convicts forced into labor. Hikers will hear the entire treacherous tale as they view the railroad tracks passing through the Swannanoa Tunnel.

Although passenger trains ceased in the mid-20th century, cargo trains continue to run east and west along the creek several times a day. From Old U.S. 70, the museum’s hike will descend to the Swannanoa Creek down below the Swannanoa Gap. Here the waterway is alternately known as Davidson Creek and Allison Creek, named for the area’s legendary earliest settlers.

The hike will continue along the stagecoach road, crossing the creek again several times to conclude at Point Lookout Greenway Trail. Since the old roadway is dilapidated from disuse, hikers are advised to wear sturdy hiking boots and bring hiking poles for added stability over the rocky road. Hikers should also dress for the weather and bring lunch and plenty of water.

The hike meets at the museum at 223 W. State St., Black Mountain at 9:30 a.m. Hike leaders will carpool hikers to the trailhead. The hike, a fundraiser for the nonprofit museum, costs $25 for museum members and $35 for nonmembers.