Black Mountain police chief Shawn Freeman was taken aback by the generosity of the Swannanoa Valley at Thanksgiving and Christmas.

Town departments to brighten the holidays for local families

Black Mountain police chief Shawn Freeman was taken aback by the generosity of the Swannanoa Valley when his department partnered with the local community to provide meals for people for Thanksgiving.

With Christmas coming up, the department was hoping to make a difference in the lives of more Black Mountain residents. Once again the community’s response has been overwhelming.

“I tell you, it’s been something else,” Freeman said of the support his department has received after word spread of the effort to give back to the community.

Freeman was contacted by Black Mountain’s public services director Jamey Matthews, who said his department was also looking for a way to help out in the community.

"In years past we always took it upon ourselves, as a department, to find a family or person in need around the holidays and raise money for them," Matthews said. "Chief Freeman came along, and he's got the same passion for helping the community we have in my department."

Matthews invited Freeman to speak to his staff about his department's efforts to raise money. Their response was "truly from the kindness of their hearts," he said.

“In public works alone we ended up raising $2,307," Matthews said proudly. "I had three people who, from outside of the department, gave me money, but my department gave $1,857. It really shows what kind of guys they are."

Officers within Freeman's department also got into the spirit of giving.

“Typically I prefer if officers with our department are clean shaven,” Freeman said. “But some of the guys approached me about doing a fundraiser, similar to No-Shave November (a national cancer awareness initiative), where they can grow out their facial hair. I told them ‘sure, if you get together $1,000.”

That’s exactly what the officers did, Freeman said, raising just over the goal he set for them.

Black Mountain employees Gabe Martin, left, and Austin Reynolds look through gifts purchased with money raised by their department and the BMPD. The gifts will go to local children in need to help brighten their holidays. (Photo: Fred McCormick)

Local businesses and individual community members continued to give as well, Freeman said. What began as a plan help a few families in town grew as “the help kept pouring in,” the chief said.

As of Dec. 14, the campaign raised around $7,000, enough to fulfill wishlists for “close to 20 kids” in Black Mountain, according to Freeman. The money not only allows for the purchase of items from those lists, but additional toys, clothes, shoes and coats as well, he added. 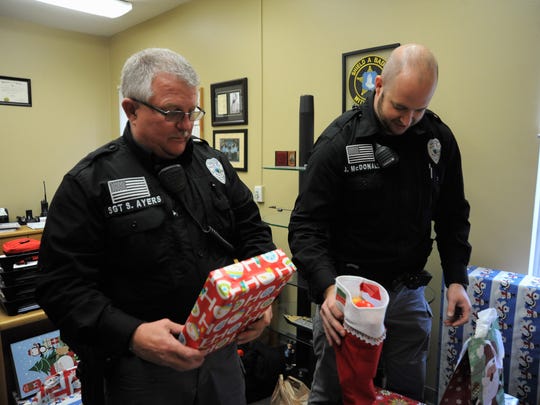 “This is really a reflection of the people that live here,” he said. “This is a community that has an amazing respect for, and willingness to help, others.”

The gifts were set to begin arriving at the station on Dec. 15, according to Freeman, who estimated that it would “probably take four truckloads” to get them here.

“We’ll be doing some wrapping at the station here in the next couple of days,” he said. “Then from there we’re going to load them up and hopefully make their holidays a little brighter.”

Employees from the police and public works departments will distribute the gifts on Thursday, Dec. 21, according to Matthews.

"It will be a great feeling to drop these presents off and make a difference for people in our community," Matthews said. "I'm super proud of our guys."