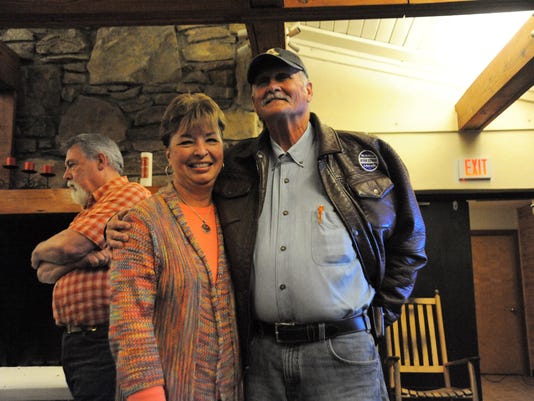 Don Collins and his wife Pam on Nov. 7, moments after Don was elected mayor of Black Mountain.(Photo: Fred McCormick)

Black Mountain has a new mayor and one new alderman.

Voters in Black Mountain turned out in four polling locations to select the mayor and two aldermen seats Nov. 7.

"I'm thankful for the outcome," Collins said from Cragmont Assembly in the moments after election results were available. "I figured I'd win, but I didn't know exactly by how much."

Collins filed for mayor with the support of the rest of the board of aldermen and with endorsements from Buncombe County commissioners Ellen Frost and Mike Fryar. Sheriff Van Duncan and the county's register of deeds, Drew Reisinger, backed Collins as well.

"This wouldn't have been possible without their support," Collins said.

The results of the election, Collins said, shows that voters are happy with the direction in which the board of alderman is taking the town. Collins has been an alderman since 2011.

"This election is just recognition of the work this board has done and my small part in it. The majority of the people in this town appreciate the board's hard work."

Collins was emotional as he dedicated his victory to his parents, who both passed away this year. He said his mother Barbara, who died at age 82 on Oct. 28, was confident in his chances.

Another believer is Ryan Stone, re-elected to his seat on the board with more than 1,300 votes. Stone also awaited the election results at Cragmont Assembly and expressed gratitude to Sobol for serving the town as mayor. He also expressed optimism in moving forward with Collins in that role.

Ryan Stone, right, and Weston Hall stand outside of Black Mountain Primary School on Nov. 7 and greet voters as they head to the polls. (Photo: Fred McCormick)

"It's important to thank mayor Sobol and his family for all of their service to this community because it's been considerable," Stone said. "I think it was time for a change, and the town obviously expressed its desire to have that tonight. I'm thrilled that Don Collins was elected, and I'm looking forward to the leadership he's going to provide."

Stone, who received more votes than any other candidate in the election, said he was humbled by the results.

"I think it means that, in spite of what some people said during the campaign, this board is getting things done and (that) we do want to listen to everyone and we're representing the community the best we can," he said. "I think it's reflective of the entire board and not just of myself. And I couldn't be happier because they're such a great group."

The new face on the board will be Jeremie Konegni, who will fill the seat held by Showers, who did not seek another term.

In his first political campaign, Konegni received 791 votes, edging out Bob Pauly (596 votes) and Matt Robinson (333 votes). "Pure excitement and joy," was what he said he felt in the moments after the numbers came in.

Jeremie Konegni greets voters in the rain near the Lakeview Center on Nov. 7, hours before he was elected alderman. (Photo: Fred McCormick)

"I'm really happy that the town came out and voted and picked me as their next alderman," he said.

Konegni's slogan throughout his campaign was "a voice for our community," and that is how intends to approach his term, he said.

"I want people to see me as someone who they can come to and voice their feelings and concerns," he said. "I want to be that person. I'm an average, working person like they are, and I want to represent regular people."