All aboard in Black Mountain? Not likely for a while

All aboard in Black Mountain? Not likely for a while 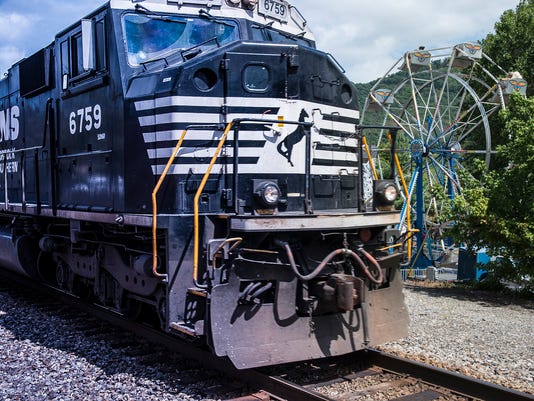 A Norfolk-Southern train passes through Black Mountain during its 2015 Sourwood Festival.(Photo: Paul Clark)

Regional members of the WNC Rail Committee are still pushing for a Black Mountain connection to the AMTRAK depot in Salisbury. But don’t hold your breath, they say.

Passenger rail service is one of the topics to be discussed Friday, Sept. 22 at the Railroads and Regional Economic Development Conference at the U.S. Cellular Center in Asheville.

Re-establishing passenger rail service to Black Mountain and Asheville via AMTRAK’s Thurway Bus Service will be discussed, as will improving and expanding freight services in the region, increasing train excursions to and through the mountains and promoting existing tourist lines such as the Craggy Mountain Line in Woodfin and the Great Smoky Mountain Railroad in Bryson City.

The town of Black Mountain and the Black Mountain Swannanoa Chamber of Commerce are two of the conference sponsors. The passenger service line from Salisbury to Asheville was discontinued decades ago, and now Norfolk Southern uses the tracks through Black Mountain primarily to carry wood chips to the paper mill in Canton and coal to the power plant in Skyland.

The N.C. Department of Transportation still has passenger rail service from Salisbury to Asheville in its plans, but they have been pushed far into the background, according to Bob McMurray, executive director of the Black Mountain Swannanoa Chamber of Commerce and a member of the WNC Rail Committee.

“One thing that hurt is Norfolk-Southern slowed the speed limit (on its line through Black Mountain) to 25 mph, which makes passenger service harder,” McMurray said.

A study by the N.C. Rail Division found that Black Mountain was the second-most requested destination not served by Amtrak, right behind Asheville. Train stations in Morganton, Marion and Old Fort have been restored in the hopes that they’ll be ready if and when train services be re-established. Black Mountain’s station is already preserved and used by the Old Depot Association.

“The commercial end needs to stay strong to have any kind of passenger lines in the future,” McMurray said. That said, Norfolk-Southern has been selling off short lines, such as the one that Blue Ridge Southern Railroad uses to run freight between Sylva and Asheville and Hendersonville, he said.

Regional freight carriers seem to be expanding in other parts of the country, and people attending the conference in Asheville will get an update of what’s going on in WNC, said Freddie Killough, WNC Rail Committee co-chair and director of the Marion Business Association, the economic development office for the city of Marion.

Keeping the freight lines going is vital to the future of passenger rail service, she said. Freight service has lsot ground to truck hauling because of low gas and diesel prices. And because power providers have retooled generating plants to operate on natural gas, trains have been carrying less coal. In October 2015, CSX Transportation shut its 135-year-old Erwin, Tennessee rail yard and reduced the number of trains coming from coal country in Kentucky through Tennessee and Mitchell, McDowell and Rutherford counties in North Carolina on their way to South Carolina, Killough said.