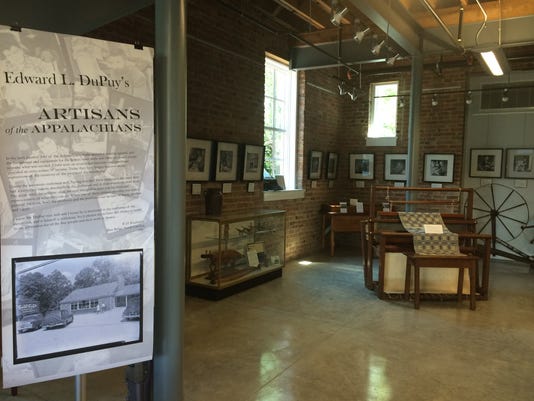 Edward DuPuy's work is featured in an exhibition at the Swannanoa Valley Museum, which reopened on Sept. 6.(Photo: SPECIAL TO BMN)

The new exhibition features the work of local photographer, Ed DuPuy. Born in Blacksburg, Virginia, in 1914, DuPuy moved to Black Mountain as a teenager. From the 1950s until the 1980s he made a living photographing weddings, special events, conference groups, real estate and commercial subjects, but he would also capture everyday life and landscapes around Black Mountain out of pure interest.

DuPuy was also an artisan woodworker whose antique reproductions are still in use in many homes. He taught classes at Black Mountain College, was a dedicated member of the Southern Highland Craft Guild, and published a book in 1967, Artisans of the Appalachians, about regional craftsmakers. Never before seen photographs of the artisans featured in the publication are exhibited alongside their wares in the exhibit.

The first, “Voting in the Valley,” will feature historic ballot boxes, one of the first automatic voting machines and a 1960s paper dress worn to promote Roy Taylor’s congressional campaign. As part of the exhibit visitors will have the opportunity to register to vote in advance of the November 2016 elections.

Celebrate Mount Mitchell State Park’s Centennial will showcase over a dozen mid-century souvenirs from the gift shops that used to surround the park.

Installation of the museum’s new permanent exhibit, “Pathways from the Past” is almost complete in the new gallery on the second floor and guests will be allowed to view the behind-the-scenes work that happens as curators bring the exhibit to life.

Along with the new exhibit opening the museum will host two special events on Saturday, Sept. 10 - the first Saturday it will be open to the public in 2016.

The newly remodeled Swannanoa Valley Museum will be open on Saturday, Sept. 10, the first Saturday it's been open in 2016. (Photo: SPECIAL TO BMN)

First the museum will host a moderate, two-and-a-half mile hike in the eastern-most community in the Swannanoa Valley, Ridgecrest. The sixth hike in the museum’s popular Valley History Explorer Series will meet at 9:45 a.m. at the museum. Hikers will then carpool to the trailhead to follow the Kitsuma Trail to a viewpoint boasting sweeping vistas of the Swannanoa Valley, including a breathtaking view of Mount Mitchell, which is visible on clear days.

The museum’s Valley History Explorer series consists of seven hikes, each about three miles long, that revisit the past of the unique, small communities that comprise the Swannanoa Valley - including Riceville, Bee Tree, Swannanoa, North Fork, Montreat, Ridgecrest and Black Mountain.

The hikes are led by knowledgeable historians and natives with deep family ties. Experienced hike leaders will take you on a half-day journey of discovery. The hikes will reveal undisclosed secrets of Swannanoa Valley history while forging new friendships and galvanizing community bonds.

The cost of each hike is $20 for museum members and $30 for non-members. Preregistration is required for all hikes.

Email info@swannanoavalleymuseum.org or call 669-9566 to register.

At 10 a.m. on Saturday the museum will host local author Ben Fortson, for a presentation on his new book, A Nutshell History of North Carolina. Fortson will stay after his talk to sign copies of the book.

From its dubious beginnings as a pirate-filled colony to a popular tourist destination, North Carolina has an amazingly colorful history. In A Nutshell History of North Carolina, author and illustrator Ben Fortson presents that history in the form of off-the-wall anecdotes, poignant insights and sublimely silly illustrations.

Take a hilarious look at Daniel Boone’s larger-than-life Carolina personality. Peruse an uproarious account of the Andrew Jackson birthplace controversy or politically astute commentary on the power of tobacco in the state.

Fortson takes readers on a side-splitting and educational ride through the annals of Tar Heel State history. Ben Fortson lives in Black Mountain with his wife and three children.

For more information about the museum or its hikes and events, please call 669-9566 or email info@swannanoavalleymuseum.org.