Discovery of parasite in Virginia means it's likely present in North Carolina.

None of the honey bees at Warren Wilson College's apiary have exhibited any unusual behavior, beekeeper Ella Siegrist said.(Photo: SPECIAL TO BMN)

The discovery in Virginia of a honey bee "zombified" by a parasitic fly means it's "quite likely" the body-snatching flies are present in North Carolina, the creator of the ZomBee Watch website says.

Confirmed cases of honey bees carrying the flies' eggs are heaviest on the West Coast, primarily around San Francisco, according to San Francisco State University biology professor John Hafernik, creator of ZomBee Watch (zombeewatch.org). But because of two cases confirmed in Roanoke and Collinsville, Virginia, Hafernik believes bees whose bodies are commandeered by the fly Apocephalus borealis are moving into North Carolina.

"Given that the first record of A. borealis in honey bees was near the N.C. border, it's quite likely that the fly is also infecting honey bees in N.C.," Hafernik said via email.

Honey bees are already in decline, because of loss of habitat, the prevalence of insecticides and a mysterious scientific anomaly known as Colony Collapse Disorder. Any threat to bees threatens humans as well, since bees pollinate much of the fruit and vegetables that we eat.

Hafernik came upon his discovery in 2008. Setting up traps that used light as "bait" to see how bees near his house would respond, he found that many bees were attracted to the light - abnormal behavior for an insect that navigates by sunlight.

That behavior led Hafernik to the parasitic fly. Apocephalus borealis, he found, "zombified" the bees by laying their eggs inside a host's abdomen. The bee behaves oddly - flying into light at night, wandering aimlessly on sidewalk - and then dies. The fly's larvae emerge days later.

Hafernik created ZomBee Watch so that people could report bees behaving erratically. Already, people have. Three cases have been confirmed in Vermont, New York and Pennsylvania, according to his website. And now there have been two instances in Virginia. 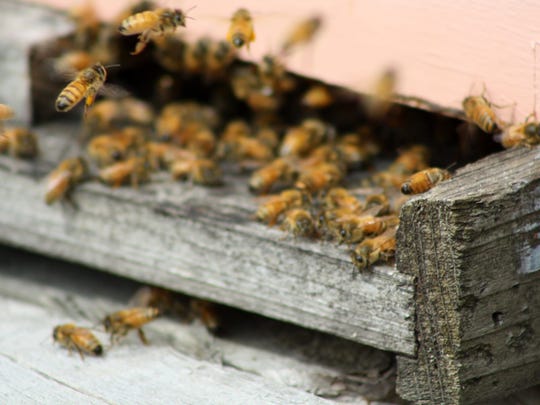 The honey bees at Warren Wilson College pollinate the crops that the college sells at its weekly farmers market. (Photo: SPECIAL TO BMN)

The Warren Wilson College garden in Swannanoa is home to an apiary, or a collection of beehives. .Ella Siegrist, a student who works in the apiary, hasn't seen any unusual behavior from any of the bees she cares for.

"I've never heard of this parasite before," she said. "But I've never seen it in any of our bees."

Hafernik hopes people will report any "zombie bees" they find.

The parasite adds to the growing list of threats to honey bees, Siegrist said.

"In the United States, the number of beehives has dwindled in the past 20-25 years," she said. "Parasites have been theorized as a possible contributor to what's commonly referred to as Colony Collapse Disorder, but it's pretty widely acknowledged now that it really is a result of many factors."

ZomBee Watch claims fly larvae is present in as much as 18 percent of foraging bees in some California hives. That could make Apocephalus borealis a contributor to the decline in the number of bees, the website states.

"We don't know at this point how often infections might cause a hive to fail," Hafernik said.