September has most birds of any month

September has most birds of any month 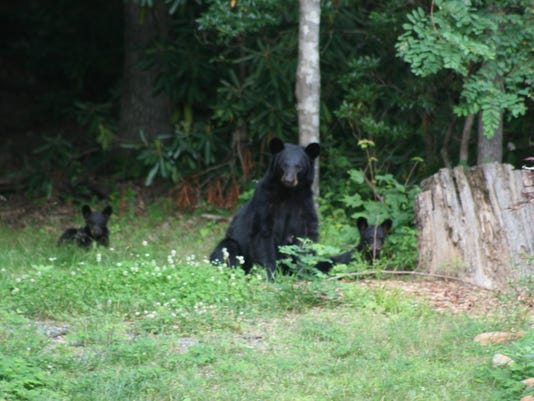 The mother black bear and her twin cubs are surveying their immediate territory.(Photo: Ben McMechen/SPECIAL TO THE BLACK MOUNTAIN NEWS)

September is a transitional month when there is some summer left and a hint of fall, especially in the early morning air. The air creeps in on misty fog and vanishes magically in the hot afternoon. Soon there will be talk about colorful leaves.

Spectacular color comes in the aster flowers weeks before the fall leaves become a riot of color throughout the Valley. The asters are dressed in their finest deep royal purples and rich golds, standing tall along the roadsides and scattered throughout the fields.

September nights are still filled with insect fiddlers. Tree crickets blend with the katydids, announcing that summer is passing. Late summer insects are driven by the swiftness of their lives, passing with summer.

The insect world is in a frenzy to perpetuate the species before frost puts an end to them. An insect’s internal clock ticks a lot faster than man’s clock. By mid-September it begins to run down.

Fireflies are already gone for the year. An occasional one may blink, but their time of illuminating the night is over.

The leaves of late summer grow weary waiting for rain to wash away the dust of summer. Windfall apples, already on the ground, are easy pickings for the bears. Bears rely on fall berries and fruits to help them pack on pounds until acorns fall.

Hummingbirds are on the move. Individual adult males get the urge to head south first usually around mid-August, followed in a couple of weeks or so by the adult females.

The juveniles head south with their own unique GPS system guiding them to where they should go, since they haven’t made the trip previously. They leave the Valley by late September.

The birds clock about 23 miles a day, migrating thousands of miles to Mexico and Central America. They fly alone, not in flocks like most other migratory birds.

The urge to wing south has nothing to do with lack of food or even temperature. It is the shorter days and the chemical changes in the bird’s brain.

Hummingbirds take advantage of the winds to push them in the right direction. They are not in a race to arrive on the winter grounds as they were to be first on the spring breeding grounds.

Hummingbird migration is still not well-documented, but research from large numbers of banding records provide the facts available. Each hummingbird species has its own migration strategy.

Banding studies show that individual birds probably follow the same route year after year. Some even arrive at a specific feeder on the same day each year. For a hummingbird that just hatched three to four weeks ago there is no memory to guide them.

A few Ruby throated hummingbirds winter along the Gulf Coast instead of moving on to Central America. Some may be sick, others too old to make the trip and others too young to have accumulated the fat needed for such an exhausting trip. Another small population winters in the Outer Banks of North Carolina. Most Ruby throated hummingbirds winter between southern Mexico and northern Panama. They begin to move north again as early as January.

Ruby-throats are not well adapted to cold nights. They have a rough time surviving below the mid-20s. They also don’t enter a torpor state as regularly as some of their western cousins, preventing them from conserving life-sustaining energy.

By mid-September, the hummers you see at feeders locally are northern ones migrating through the Valley. The number of birds migrating south is usually about twice that of the northward trip because it includes immature birds that hatched during the summer.

Don’t take down the hummingbird feeders until freezing nighttime temperatures arrive, because the late travelers will need to refuel. Bob Watts reported he was still feeding hummingbirds on Nov. 13 last year.

And then the first really cold weather of the season arrived, and the birds moved on.

Black bears are in an eating frenzy, putting on weight for cold weather. They spend almost all day and night feeding. Fall berries will start ripening, and they are loaded with sugar. Apples are already a part of bear diets.

The bears are shedding hair, getting ready to put on winter coats, making some appear almost naked in spots.

Scrub the birdbaths with a brush, and replace the water at least every other day until hot weather is just a memory.

Clean water discourages mosquito reproduction. Hummingbird feeders should be cleaned every three to five days, or every other day if lots of hummers are sipping.

Keep out plenty of fresh water for drinking and bathing and keep the feeders full. Take them inside, including the hummingbird feeder, to prevent a bear from raiding them.