June is no hurray to reach summer

June is a tranquil month, a pause for Mother Nature after spring’s push from bud to bloom

June is no hurray to reach summer 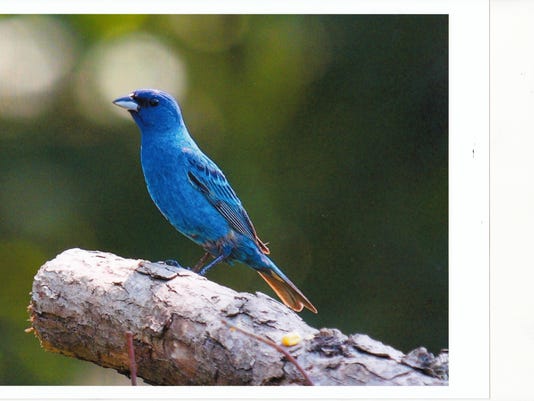 The male Indigo Bunting is one of the most strikingly beautiful birds in Western North Carolina. He brings the tropics to the backyard feeders.(Photo: SPECIAL TO THE BLACK MOUINTAIN NEWS/Art DeJong)

June arrives as tranquil and predictable as the sunrise. There is no hurray now in nature. There was an almost frantic push from bulb to flower, the arrival of migrating birds, and the rush into breeding season. Now Mother Nature pauses and takes a deep breath.

Trees once again cast the cool shade that they have since the mountains were new. They form a comforting canopy with sunlight filtering through. June gives voice to the eternal rhythm of the seasons. June is life and growth “speaking.” This is a serene time in nature.

Fireflies are blinking in the late June evenings, signaling each other. If you grew up in the eastern portion of the country, it is a long-time tradition that children catch fireflies. The natural lanterns are a source of endless fascination for little minds.

These glowing beetles contain an organic compound in the abdomen called luciferin which produces a chemical reaction resulting in the familiar glow of a firefly. There are those that blink randomly. Others practice synchronized blinking.

The blue ghost fireflies do not blink but glow an eerie blue or green color.

The glow of the lightening bug is “cold fire,” giving off no heat. They don’t seem to be tasty treats to most predators, but some frogs eat so many of them that they glow. Glow worms are the larvae stage of lightning bugs and glow a greenish yellow color. They prefer moist ground for a growth stage.

Lady slippers, a type of wild orchid, are still blooming in the woods. Their numbers are in decline because so many of them have been collected by people. They provide a food source for numerous insects. Whitetail deer enjoy them. Appreciate their beauty in the wild, and leave them where you find them.

The Indigo Buntings arrive when they there is plenty natural food available. With a tinge of silver on the bill, an Indigo Bunting is as blue as a wedge of Carolina sky, earning it the label of “blue canary.”

The female and juveniles are cocoa brown. The male sheds the beautiful blue feathers in the fall and grows brown ones for winter. Then it molts again, putting on the blue feathers to return to the spring breeding grounds.

Although Indigo Buntings spend a lot of time on the ground searching for weed seeds and nesting in low-growing shrubs, the male finds the highest perch he can in the spring and sings from dawn to dusk. He learns songs as a youngster, but not from his father. Those in the same area sing identical songs.

The female Indigo Bunting builds the nest alone, taking eight to 10 days in the spring. If she nests a second time, the nest goes together in three or four days. The male watches but does not help. Some males help feed the babies and some refuse.

Most of the chick-raising is left to the female. Both males and females often mate with others in the area, leaving monogamy for other birds.

They nest late in the season compared to other songbirds and are one of the earliest birds to head south, flying as many as 1,200 miles to winter in South and Central America. Some leave as early as late July. They also fly due south following the stars at night.

Most of what researchers know about celestial navigation comes from the study of captive Indigo Buntings at Cornell Labs of Ornithology. They possess an internal clock that enables them to continually adjust their angle of orientation to a star as it moves through the sky.

Spring bird migration is finished. Summer residents are just about finished courting, and now nest building, egg laying and getting the little ones out of the nest and on their own is the focus. As June progresses, watch for juveniles accompanying their parents to feeders.

House wrens begin nesting in June, and Wood and Mallard ducklings are continuing to hatch and venture into local lakes and ponds.

Canada geese are entering a molt phase and will not fly for at least a month until new wing feathers grow. This is one of the most dangerous times for them, because they are grounded, making them easy prey for dogs, coyotes and foxes.

Keep out plenty of fresh water for bathing and drinking, and keep the birdbaths free of algae.

Take in the bird feeders so Black Bears won’t be tempted.