October brings a pair of events, centered around Monarch butterflies, to the Swannanoa Valley 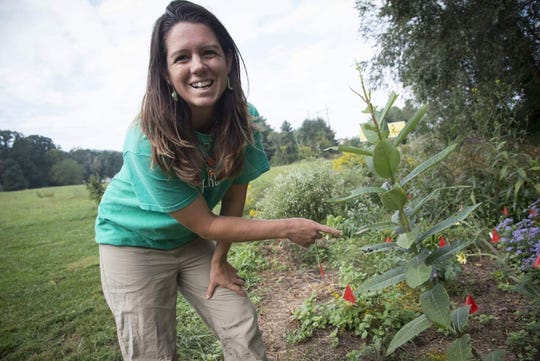 Emily Sampson is the caretaker of the Monarch Waystation in Veterans Park, which will host one of two events centered around the migrating pollinators during the month of October. (Photo: SPECIAL TO BMN)

Monarchs in North America have been gearing up for their southern migration since late August. By early October, they will make their way to us from as far north as Canada.

Many folks in the U.S. have reported seeing them in greater numbers throughout the season, which is expected based on a large 2018-19 overwintering population in Mexico, up 144% from the previous year.

At the Monarch Waystation, along the Black Mountain Greenway, we have been counting monarchs all summer as part of the Monarch Larva Monitoring Project, a National effort, led by the University of Minnesota, to better understand the monarch population and migration patterns.

We have found eggs, caterpillars, and adult butterflies, in the half-acre pollinator garden, every month since the first adult butterflies arrived in early April. Since late August, we have seen especially high numbers, with more than 400 eggs and at least 80 caterpillars on the roughly 350 common milkweed plants here.

An increase in the number of monarch caterpillars has been observed at the Waystation every year since it’s establishment in 2015, which is reflective of general trends in the overall monarch population.

While this is good news, it doesn’t mean that monarchs and other pollinators are in the clear. The monarch population is still recovering from a 2014 population low where scientists feared the migration could be lost.

As with other flying insects, the main causes for decline are thought to be habitat loss throughout its range and the increased use of herbicides and insecticides in agriculture and in the residential landscape (Xerces Society). Creating and preserving native plant and pollinator habitat on both public and private land is the only way to mitigate these pressures and ensure that we will have monarchs and other pollinators for generations to come.

Want to celebrate monarchs and learn more about their conservation? There are two events in Black Mountain the first weekend in October, when the migration of monarchs is expected to be at its peak in our area.

On Saturday, Oct. 5, from 1 - 3 p.m., is the 11th Annual Hop’n Blueberry Farm Monarch Tag and Release with Van Burnette. Watch monarchs fly around in a field of Zinnias, while kids attempt to catch and tag them. The event will take place at 24 Middle Mountain Road, off North Fork Left Fork Road in Black Mountain.

On Sunday, Oct. 6, from 3 - 4 p.m., join Emily Sampson, native plant and local butterfly conservationist, at the half-acre pollinator meadow along the Black Mountain Greenway to learn about pollinator gardens, observe monarch caterpillars and chrysalis and tag and release adult butterflies. This event will be held at 99 White Pine drive, Black Mountain. Parking is behind the Grey Eagle Arena and fire department.

The monarch meadow area is along the greenway, below the Dr. Wilson Community Garden.

Emily Sampson is the caretaker of the Monarch Waystation in Veterans Park.