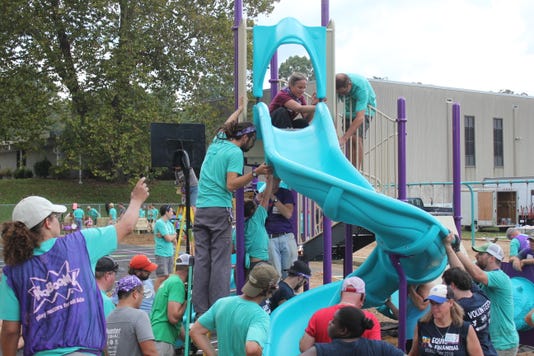 A team of volunteers, on Oct. 6, works to complete the construction of a playground at Black Mountain Primary School in a single day.(Photo: Fred McCormick)

On the days leading up to Oct. 6, Margaret Hurt worried if she’d be able to recruit enough volunteers to build a playground in a single day at Black Mountain Primary. The goal was 200 and she had 100 people committed.

Would that be enough?

Fortunately, many people showed up to register on that “build” day. In all, more than 250 people arrived ready to pitch in and help build a new resource for the community. The extra hands allowed them to tackle some side projects, like bringing in extra mulch, that they wouldn’t have been able to accomplish with fewer volunteers.

The playground became a reality after the YMCA of WNC, along with Buncombe County Schools, applied for a KaBOOM! grant to transform the aging Black Mountain Primary playground into a state-of-the-art play space. KaBOOM! Is a national non-profit organization that pairs funding partners with under-resourced communities to build safe, inviting playgrounds.

Hurt doesn’t currently have a child at Black Mountain Primary, but she teaches reading at the school and has served as PTO president in the past. Her work on the playground committee focused on volunteer recruitment.

The volunteers covered a wide span of ages.

“We had church members, ROTC students from the high school, lots of older people, and people who had recently moved here who wanted to get involved in the community,” Hurt said. 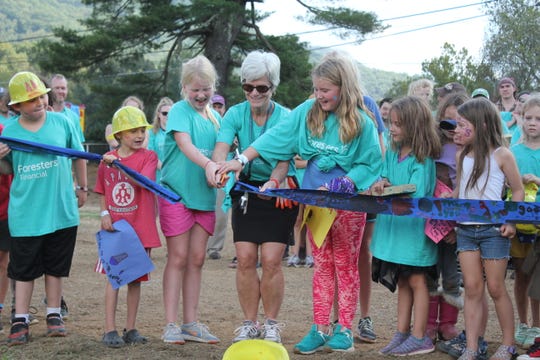 “It’s so encouraging to be part of something where you see that there’s a lot of people in this community who really care,” Hurt continued. “I think it’s a great thing for people to know that it’s a community playground. Sometimes people think it’s at the primary school and they don’t realize it’s for the community. We want the community to use it—bring your kids and grandkids.”

Jaime Conner and her son, Kamden, have a special bond when it comes to this playground. Jaime played on a playground on the same site as a child. Now, her third grader is enjoying the updated equipment. Her son told her, “Now someday my children will get to play on the same playground I played on too.” His favorite activity is described as the “spinny thing,” which is sort of a rotating climber. He also enjoys the various climbing bars, slides and swings.

In comparison to the playground of her youth, Jaime says the new one is vibrant with bright, attention-getting colors. “It would have been easy to drive by the old playground and it be overlooked,” she said. “This one also has ample seating and even picnic tables, which is something the old playground was lacking.”

Most of all, she said she loves the fact that it’s a place where fun memories are made. 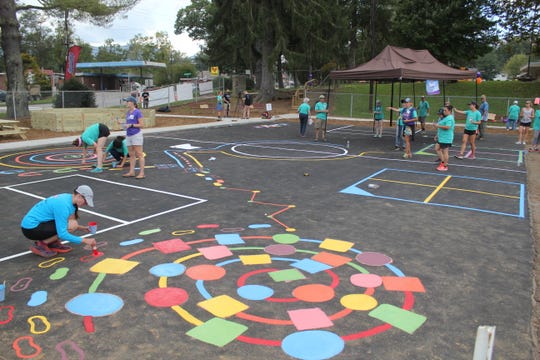 Malorie McGinnis, the principal at Black Mountain Primary, says one of the biggest impacts she sees is that a lot of dads are enjoying the playground with their kids in the evenings and weekends.

“We haven’t seen that in a very long time on that playground. It wasn’t getting much use at all. I don’t want to leave mommies out, but there have been a lot of daddies down there. I think that’s very unique,” she said.

Beyond the fun, McGinnis said her students feel a great sense of pride for having participated in the design process. Early in the planning stages, students were encouraged to dream big and put their image of a great playground on paper.

“That’s where we started just getting the conversation going with young children,” said McGinnis.

After that, KaBOOM gave a presentation to families, along with photos of large pieces of equipment, and the children and adults voted for their favorites. To prepare for the new playground, the school removed all the old equipment except for the swing sets.

“The footprint is larger than what the playground was before,” said McGinnis. “Our hope is that we will eventually have a walking trail or track of some kind because we have the space to do that.”

She’s still amazed at what happened on Oct. 6 as the army of volunteers built the playground in a single day.

“Being in a small town,” she said, “it really just exemplifies what happens when people come together."