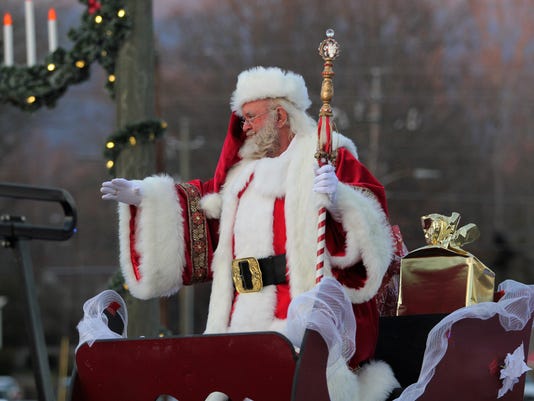 As temperatures drop and Christmas approaches, the Swannanoa Valley prepares for the return of some of its favorite holiday traditions.

The season, which is highlighted by Holly Jolly and the annual Christmas Parade, kicks off with the lighting of the tree in Town Square at 5 p.m. on Friday, Nov. 23.

The Messiah in Montreat Concert returns to Graham Chapel at 4 p.m. on Sunday, Nov. 25. A $10 donation is suggested and admission is free.

On Friday, Nov. 30, from 8 a.m. - 5 p.m., the public will have its first opportunity to view "Deck the Trees" at the Monte Vista Hotel. The annual fundraiser features trees decorated by local businesses and other members of the community. Visitors can vote for their favorite tree by making a cash donation. All of the money raised goes to the Swannanoa Valley Christian Ministry Fuel Fund. Trees will remain on display through Sunday, Jan 6. For more information contact Libba Fairleigh at libbafairleigh@gmail.com

Later that evening, at the White Horse Black Mountain, Joshua Messick will perform a CD release concert for "Hammered Dulcimer Christmas, Volume II." The concert begins at 8 p.m. and admission is $18 in advance at whitehorseblackmountain.com or $20 at the door.

The month of December kicks off with a Christmas Concert at Montreat College. The Saturday, Dec. 1 event will be held in the Upper Anderson Auditorium from 6 - 7:30 p.m.

A Mountain Folk Harpers concert will take place from 3 - 4:30 p.m. on Sunday, Dec. 2, at the Black Mountain Center for the Arts. Admission for the Christmas Ensemble concert is $10 and tickets are available at blackmountainarts.org.

The Annual Chamber Christmas Banquet, for members and volunteers of the Black Mountain-Swannanoa Chamber of Commerce, will take place at 6 p.m. on Tuesday, Dec. 4. The event is held at the Assembly Inn and tickets are available through the Chamber.

Holly Jolly, which kicks off the Valley's most festive weekend, according to Chamber of Commerce executive director Bob McMurray, gets underway at 5 p.m. on Friday, Dec. 7.

The annual event draws hundreds of people to downtown Black Mountain every year, as Cherry Street and Sutton Avenue are closed to traffic. Shops will be open until 9 p.m. and Santa Claus will pose for pictures with children at the Old Depot.

As in years past, McMurray said, the Owen High School marching band and dance team will deliver holiday-themed performances.

"The dancers from Black Mountain Center for the Arts will be there and ArtSpace (Charter School) will have students performing as well," he said. "All of that will take place right there at the end of Cherry Street."

Perhaps the most popular local holiday tradition, the Black Mountain Christmas Parade, makes it way west along State Street beginning at 4 p.m. on Saturday, Dec. 8. This year's theme will be "Christmas: Then & Now," McMurray said.

The grand marshal of the parade this year is local beekeeper Edd Buchanan.

"Our committee decides on the grand marshal every year," McMurray said. "This year we honored Edd at the Sourwood Festival for his 41 years there, and all of the other things he's done for the community, so he felt like a good choice to lead the Christmas Parade."

Entry into the parade is $20 and the Chamber will continue to accept applications until Dec. 3.

The floats will be judged prior to the parade and prizes will be awarded for first, second and third place. 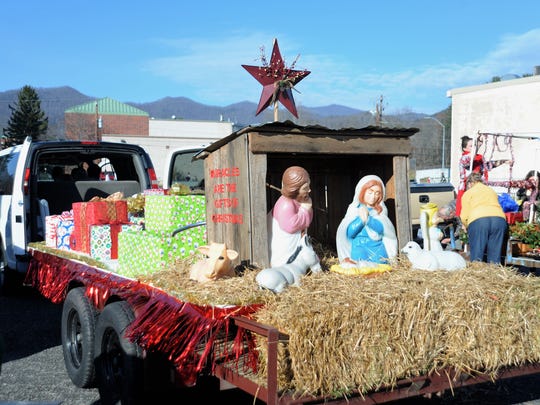 The top floats in the Black Mountain Christmas Parade will be decided by a panel of judges before the parade begins on Dec. 8. This year's theme will be "Christmas: Then & Now." (Photo: Fred McCormick)

Riding his sleigh, sponsored by Montreat College, Santa will bring up the rear of the parade.

"Everyone gets excited to see Santa every year," McMurray said. "It's always a lot of fun to see the faces of the children light up when he goes by."

Immediately following the parade, the Town of Black Mountain Recreation and Parks Department will hold the Circle of Lights at Lake Tomahawk.

The Black Mountain Center for the Arts Clay Studio will host an exhibit and pottery market from 5-8 p.m. on Friday, Dec. 7. The next morning, from 9-11:30 a.m., the Black Bear Tavern in the Village of Cheshire will host a breakfast with Santa. Santa will return to the restaurant at the same time on Saturday, Dec. 15.

The 15th Annual Owen Holiday Arts and Crafts Show will return to the gym at Owen Middle School on Saturday, Dec. 8. The event, which runs from 10 a.m. - 4 p.m., will feature juried art, music, food and prizes. Santa is also scheduled to make an appearance.

Children can have their pictures taken with Santa at the Monte Vista Hotel on Monday, Dec. 10 from 5-7 p.m.

"A Christmas Pudding" by David Birney will show at the Black Mountain Center for the Arts from Dec. 14-22, with Friday and Saturday evening performances set for 7:30 p.m. and Sunday matinees at 2 p.m. Tickets are available online.

"There are plenty of things going on around the holidays in the Swannanoa Valley, it really is a time for local people to get together, catch up and enjoy what the season has to offer," McMurray said. "It's a special time of year here in the Valley."