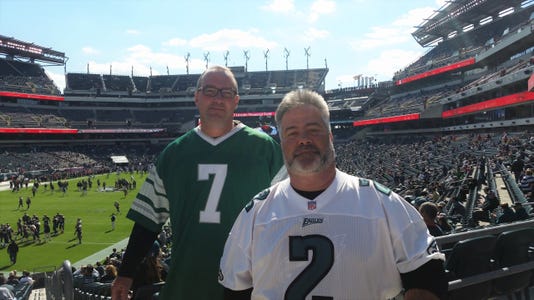 Chris Maloney, right, and Bill Mohr attend their first NFL game together at Lincoln Financial Field in 2014. The duo will visit their 11th NFL stadium together on Nov. 18, when the New Orleans Saints host the Philadelphia Eagles.(Photo: SPECIAL TO BMN)

There figures to be a lot of noise inside of the Mercedes-Benz Superdome in New Orleans on Nov. 18 when the hometown Saints host the Super Bowl champion Philadelphia Eagles. The overwhelming majority of the 77,000 people in attendance will be cheering on Drew Brees and the NFC South’s first place team.

But among the mass of black and gold cheering on the Big Easy's team, a pair of Black Mountain residents will be there for an entirely different reason.

Chris Maloney and Bill Mohr were watching football on a Sunday in Dark City Deli in 2013. The televised game was in Seattle and a shot from the Hawk's Nest section high above CenturyLink Field led to a simple question.

“I was like ‘wouldn’t it be neat to see a game from up there?’” Maloney recalled. 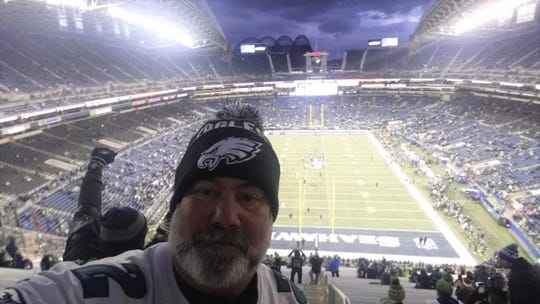 Chris Maloney takes a selfie from the Hawk's Nest in Seattle, the spot that inspired him and his friend Bill Mohr to try to visit every NFL stadium. (Photo: SPECIAL TO BMN)

Before the start of the 2014 NFL season, Maloney and Mohr began what is now an annual ritual.

Bill Mohr points to the scoreboard as his Giants picked up a rare win this season in Houston. (Photo: SPECIAL TO BMN)

“The (NFL) schedule comes out in April,” Maloney said. “Right then we start coordinating what games we might want to go see and look at taking time off from work.”

They always pick one Philadelphia Eagles game and one New York Giants game.

Mohr is a native of New York, who grew up rooting for the Giants. Maloney has been a fan of the Eagles since he was a child, and even attended the 1980 divisional championship game at the old Veterans Stadium. 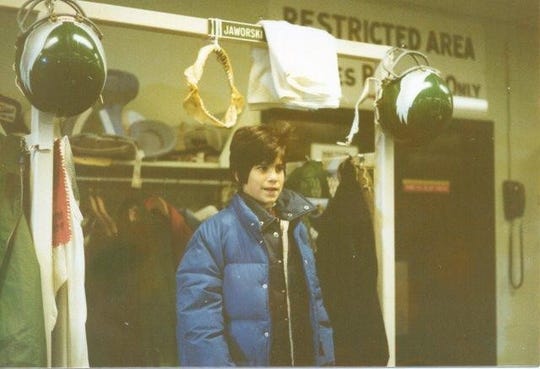 A young Chris Maloney stands at the locker of former Eagles quarterback Ron Jaworski in 1980. (Photo: SPECIAL TO BMN)

“From that point on, I was hooked,” he said.

Mohr and Maloney attended their first game together in Philadelphia in 2014. The game in New Orleans will be their 11th.

“We’ve been to Philly, Miami, Tennessee, Tampa Bay, Green Bay, Cincinnati, Houston, the old stadium in Atlanta, Carolina and Seattle,” Maloney said. “And with New Orleans we’ll be like a third of the way there.”

Earlier this season the pair went to Houston, where Mohr’s Giants picked up what was their only win of the season going into their week 10 contest with the San Francisco 49ers. 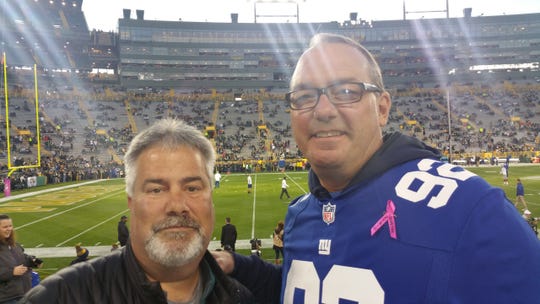 Chris Maloney, left, and Bill Mohr attend a game in Green Bay, Wisconsin on their quest to visit every NFL stadium. Lambeau Field was Maloney's favorite of the first 10 they visited. (Photo: SPECIAL TO BMN)

Last year, as Maloney's Eagles were marching toward their first Super Bowl victory, he was sitting in the Hawk's Nest watching them play the Seahawks.

"That was one of our few losses last year," he said. "So I was kind of unlucky there, but it was great to be up there in the same place that kind of inspired the whole thing."

The experiences have been "amazing," Maloney said.

"I mean we love football, and getting to see these different cities and the fans and all of that is such a good time," he continued. "We even got to see a game at Lambeau Field, and that was one of the coolest things I've ever done. Those Packers fans are so nice."

As much as Mohr enjoys the experience as a football fan, the cultural experience is a bigger part of it to him.

Chris Maloney, right, and Bill Mohr pose with the Rocky statue near the steps of the Philadelphia Museum of Art. Later the two would attend their first NFL game together. (Photo: SPECIAL TO BMN)

When they visited Philadelphia, Maloney said, they ate at the famed Geno's Steaks and Pat's King of Steaks. They ran up the 72 steps at the Philadelphia Museum of Art and posed with the Rocky statue nearby. In Wisconsin, they sampled cheese and took in a college hockey game. The visited the famous Pike's Place Fish Market in Seattle and toured the Coca-Cola factory in Atlanta.

"It's really fun to see the differences and similarities of people in different parts of the country," Mohr said. "I travel all over the world, so it's neat to go with Chris to all of these places and experience all of this stuff together."

In Houston they ate Texas barbecue and caught an Astros game. In New Orleans, they'll spend time in the French Quarter and sample a wide array of local food.

Traveling the country has also allowed them to reconnect with friends and family, Maloney said.

"Bill took his dad to the Tampa Bay game, and that was really fun," he said. "I caught up with a friend in Houston who I hadn't seen in 30-something years."

They took their children to a Panthers game in Charlotte last season.

"This started out with us watching a football game," Maloney said. "But it's become something so much bigger than football, it's something we both really look forward to every year. I'm really glad we're doing this together."