Golfers chip in for Calvin

Golfers chip in for Calvin 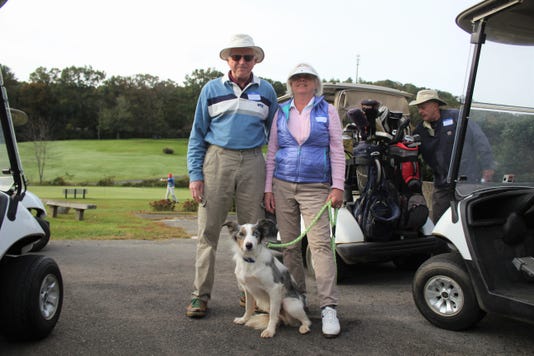 Bill and Cathy Punshon, handlers for the town's goose dog Calvin, bring the border collie to the golf course and Lake Tomahawk regularly to manage the population of Canada geese.(Photo: Fred McCormick)

As the temperature at the Black Mountain Golf Course hovers around 40 degrees on Oct. 23, dozens of golfers stand bundled up outside of the pro shop.

"We love Calvin," one voice can be heard as alderman Maggie Tuttle gives last-minute instructions before tee time. The "man of the hour," or more accurately "good boy of the hour," looks on anxiously anticipating the arrival of geese.

Since May the border collie has utilized his natural instinct to herd while patrolling the golf course and Lake Tomahawk, where he deters the ever-increasing population of Canada geese.

The golfers gathered on the chilly Tuesday morning are playing in a tournament to show their appreciation for Calvin and his handlers, Bill and Cathy Punshon.

The Town of Black Mountain purchased Calvin from Charlotte-based Fly Away Geese, which has trained the breed to manage nuisance goose populations around the country for over 20 years.

Canada geese were nearly hunted to extinction around the turn of the 20th century before receiving protection from the federal government in 1918. While the species used to be migratory, it has thrived in urban areas like Black Mountain, where its population has grown dramatically. 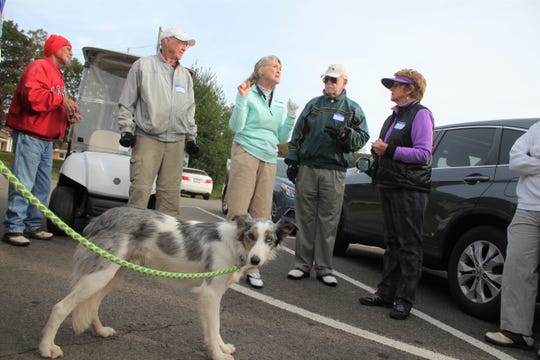 Calvin perks up as he catches a glimpse of movement on a fairway at the Black Mountain Golf Course where members held a tournament to help his handlers with his care. (Photo: Fred McCormick)

Tuttle, an avid golfer and member at the course, said the town had tried multiple methods to address the problem.

"We had dog silhouettes around the golf course, and eventually the geese caught on and realized they weren't real," she said. "Then we had a drone but the geese would just leave the golf course and go to the lake."

The Punshons bring Calvin to both regularly.

"He loves to run the geese," said Bill, who, along with his wife, were asked by Tuttle in May if they would be interested in serving as volunteer handlers for Calvin after the resignation of former town manager Matt Settlemyer. "But they're getting to the point where they recognize him so he doesn't get to chase them as much as he used to. 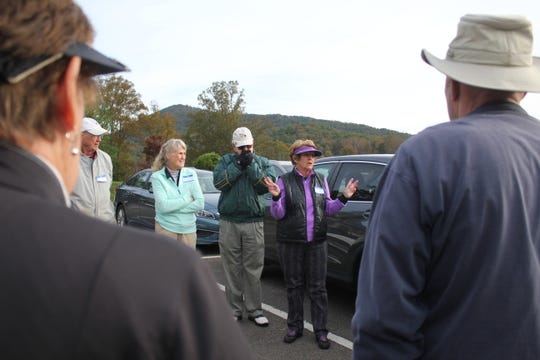 The Punshons travel to Black Mountain from their Riceville home as often as five times a week, they said.

"We take him either in the car or walk him close to the geese," Cathy said. "We give him a signal and he takes off after the geese, and once they take flight he circles around and comes right back to us."

Calvin is not interested in hurting the geese, but instead herding them. Sometimes the birds will land on the lake, but that doesn't deter the Calvin or his handlers.

"We have kayaks and we put both dogs in them," Cathy said of Calvin and the couple's border collie-mix Daisy. "We paddle up to them and when they see the dogs they take off."

Calvin is a consistent present around the golf course too, where the Punshons are members. He can often be found in the pro shop after his work is done and his handlers play a round.

The impact Calvin has had on the goose population around the golf course is undeniable, Tuttle said.

"He's made such a big difference," she said. "And people love seeing him around the shop."

"We walk him 2-3 miles every day," he said. "He gets plenty of off-leash time too because we have a big fenced-in yard."

At the Punshons home Calvin is just another member of the family who sits on the couch and watches TV, Cathy said.

"We really enjoy taking care of him," she added.

While golfing on a Tuesday morning, Tuttle struck up a conversation with a group of men who play regularly at the course as well.

"I asked them what they thought of the job Calvin was doing," she said. "And they all said he was doing great."

Tuttle mentioned that her group and the men's group should play a tournament one day to raise money to help the Punshons with gas and other incidental expenses related to Calvin's care.

"Everyone was excited to do it," Tuttle said. "There is a lot of support in this community for Calvin."

The tournament raised just under $450 for the Punshons, according to Tuttle.

Bill and Cathy were not only grateful for the support from their fellow golfers, but they feel lucky to be given the opportunity to care for an animal they say is doing important work in the community.

"We take him out and about in Black Mountain and make sure that we introduce him to people," Cathy said. "Everyone loves him and thinks its so neat that they town has a dog doing what he does. When they ask if they can pet him we always say please do because he's really their dog."