Race on May 12 to benefit Swannanoa school

It was a warm and sunny day in the field behind W.D. Williams Elementary School April 18 when about 20 girls gathered in a circle.

"I am strong," they shouted in unison. "I am invincible! I am girl! Hear me roar!"

Many of fourth- and fifth-grade girls, having just run for 20 minutes as a part of the Fit Girls program, were still getting their breath as they broke the circle.

Fit Girls at the school is a running club started 10 years ago by teachers Jeannette Hampton and Ellen Parry. The group, which also includes third-grade teacher Julia Moore, meets after school every Monday and Wednesday.

"Its goal is to help build healthy minds, bodies and hearts," said Hampton, who teaches third grade at Williams. "We do it every fall and spring."

The group at the school utilizes curriculum from the national Fit Girls program, which promotes reading and running among adolescent girls. The six-week season prepares them to run a 5K.

"We always have trouble finding a 5K that fits our time frame in the spring," Hampton said. "So this year we thought let's make our own and we can turn it into a fundraiser for the school."

It will be the first time some of the girls in the club, like fourth-grader Charlotte Matzke, have run in a 5K.

Girls in the fourth and fifth grades at W.D. Williams Elementary School stretch before running as part of the Fit Girls running club on April 18. (Photo: Fred McCormick)

"I'm excited and nervous at the same time," Matzke said after practice. "It's a weird combination of emotions."

Joining the group, Matzke said, awakened her love for running.

"I like how running lets me push myself," she said. "I can keep doing it and keep getting gradually better. I love that feeling and the feeling of accomplishment for doing another lap when I'm tired."

Finding out what they're capable of is especially important to many of the girls who will find themselves in middle school next year, according to Moore, who started running herself after becoming involved in Fit Girls.

"We've had kids go on and become involved in running in middle school, and they weren't runners before (joining Fit Girls)," she said.

"For some of them who are more athletically inclined, it gives them something to be successful in," Hampton added. "We've had girls go on to place in their age groups at races and earn medals."

The club also creates an opportunity for the girls to socialize in a supportive and noncompetitive environment, Hampton said. That's one of the things Matzke enjoys about Fit Girls, she said.

"Sometimes I do great when I run with a partner," she said. "Having someone running with me helps push me, but it also feels supportive."

One of several Fit Girls members joining Matzke in the War Pony 5K is Ginger Riddle. The event won't be the first 5K for the fifth-grade student. "I've run two already," she said. "I finished the Jingle Bells 5K in around 45 minutes, even though it was really cold that day." 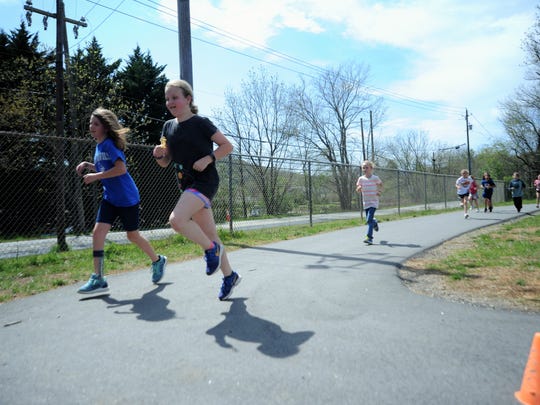 Riddle joined the group last year because she had friends who were participating. She quickly took to the sport. "It helps me get the wiggles out if I'm antsy," she said. "It's fun to come out here and run with my friends."

The camaraderie is a big part of what makes Fit Girls such a great group, Moore said. "Everyone encourages each other," she said. "It's a really positive atmosphere."

Just before practice ends the group gathers in a circle. Beads are awarded to girls who stood out during the run.

"We look for kids who are working hard or being particularly supportive," Hampton said. "We give them these beads that they can put on their shoes as a way of recognizing them."

After letting out their collective battle cry, the girls are asked to record their experience in a running log.

"We have them write how many laps they ran in their reflection log," Parry said. "They list the amount of time they ran and how they feel. It helps them reflect on their running and gives them another way to see their growth."

The culmination of the spring running season will be the War Pony 5K.