For most people, the holiday season is a time for families to enjoy each other’s company around the dinner table and exchange gifts with loved ones. Yet in Black Mountain there are many who can’t afford a pricey Thanksgiving meal with all the fixings, or toys to put under a Christmas tree.

The holidays tend to inspire kindness and compassion, something the Black Mountain Police Department rediscovered while working with businesses and community members to help. And it all began during summer.

On a hot, humid day in August, Thanksgiving was likely the last thing on the mind of people at the Sourwood Festival in downtown Black Mountain. It was, however, something Chief Shawn Freeman, the town’s police department since May, was thinking about.

At the police department’s tent at Black Mountain and Sutton avenues, T-shirts he ordered were selling briskly. Freeman was pleased - he planned to use the money to help local families during the holidays.

“We may have made a couple of dollars per shirt,” the chief said in a recent interview. “But what (selling them) really did was give us the opportunity to tell people that we were working on raising money. It set the wheels in motion.” 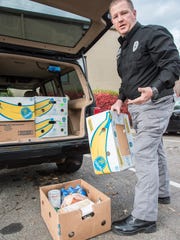 Word the department was raising money for the holidays spread quickly among local businesses, such as Hunters & Treasures Pawn Shop, owned by Roger Brown. Stopping by the police department’s tent during the festival, he introduced himself to the chief, who mentioned the department was working to build a stronger bond with the community.

The two men talked about the "Christmas Cheer" program that the late Johnny Raines headed up. Raines, a popular figure downtown who passed away in 2015, served as chief of the Black Mountain Auxiliary Police Department.

“Johnny would collect donations of toys and money for items for local families,” Brown, a lifelong Black Mountain resident, said. “It was a great program.”

Other business owners and community members approached Freeman about getting involved. The department decided to raise money for Thanksgiving meals for Black Mountain families who needed them, as well as groceries for elderly locals who may not need to cook a feast for the occasion.

"We were able to provide eight full meals for families," Freeman said. "I mean it's all the trimmings: a huge spiral ham, a bag of potatoes, desserts, drinks, corn, green beans, bread."

Many of the people who received food, which was hand-delivered by police officers Nov. 21, were referred to the department during routine community interaction. "Some of them came from Meals on Wheels, and some of them came from the Swannanoa Valley Christian Ministry," Freeman said.

The department will use the remainder of the money raised to buy presents for local children for Christmas.

"We interact with so many people throughout the year, sometimes we see first-hand some of the people who are truly in need," Freeman said. "We want to make Christmas less stressful for some local parents while making it more joyful for local kids."

That's an important part of what the local police department does, Brown said, which is why he believes the community is so supportive of this effort.

"It really sends the message that they're a community police department and they really want to embrace the community and help," he said.

The response from the community has been overwhelming, Freeman said.

"We're creating a partnership with citizens who are asking us how they can help out," he said. "The way people in this community reach out to help one another is amazing. It's unlike anything I've ever seen in other towns I've worked in."