During his 22 short years on earth, Adam Muzic made quite an impression on those who knew him. So it was hard to believe he was gone when the young man who many described as full of life fell to his death from Upper Catawba Falls on June 24.

Adam Muzic is gone but far from forgotten

During his 22 short years on earth, Adam Muzic made quite an impression on those who knew him. So it was hard to believe he was gone when the young man who many described as full of life fell to his death from Upper Catawba Falls on June 24.

The Owen High School graduate’s memory will live on through the Adam Muzic All In Scholarship.

To know Muzic was to love him, according to Jeff Foster, the former wrestling coach at Owen who coached Muzic before he graduated in 2013.

“Adam was one of those kids who had a purpose for everything he did,” Foster said. “He was fun to hang around. First to show up at practice and last to leave. He always wanted to help out.”

When Foster heard about Muzic’s accident he approached Owen principal Meg Turner and Buncombe County Schools Foundation with the idea of establishing a scholarship in the former student’s honor.

“What we want to do with that scholarship is look for students who don’t just excel at athletics or in school, but kids who help out in the community,” Foster said. “The committee members to decide who it's awarded to will consist of me and Adam’s family and the Owen scholarship committee.” 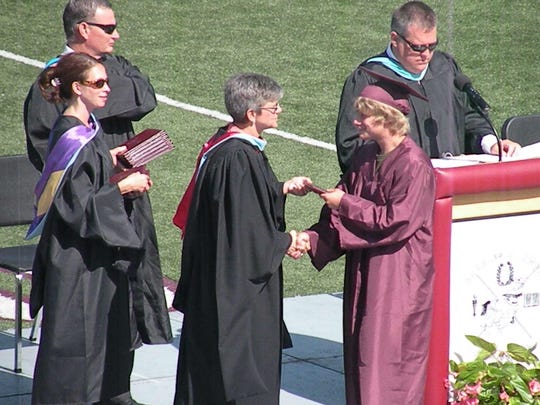 Chrystal Muzic, Adam’s mother, said her family moved by the honor. “We completely broke down,” she said. “It’s such an honor to have Adam remembered through something like that.”

Foster, who spoke at the funeral service for Adam, described his former student's character as "rare."

"People could really learn a lot about how to be a good person from Adam," he said. "He knew life wasn't about how much money you make or friends you have. It's about what you can contribute to the success of others. And that's how he lived."

Chrystal described the outpouring of support from the community as "touching."

"We held his service at the Swannanoa Church of God," she said. "We couldn't even believe how many people showed up. There were people standing outside because there wasn't enough room in the church to hold everyone that came to show their love for Adam."

Many of those in attendance brought items to donate to Adam's 10-month-old son Daxton.

"He loved Daxton so much," Chrystal said of Adam. "The would both just light up when they were together."

Adam hiked to the top of the falls, which are located in a section of the Pisgah National Forest in Old Fort, with his girlfriend, Chrystal said.

"The were walking, and he slipped," Chrystal added. "He sat down for a minute, they talked about what they were going to do for supper and when she stood up to leave and turned around, he was gone."

Cathy Dowd, a public affairs officer for the U.S. Forest Service, told The Asheville Citizen-Times that the path to the waterfall is not an official trail and signs discouraging hikers from using it are posted.

"It's incredibly tragic when we have a death like this," she said. "The only thing we can hope is that it serves to educate others about these dangers."

Adam's family is finding it hard to move forward without him, but Chrystal said it's important to live life to the fullest because that's what her son would've wanted.

"We're going to have to be as happy as possible," she said. "We have to teach his son the same things we taught Adam, which is to never give up and be positive no matter what."

To make a donation to the Adam Muzic All In Scholarship, mail a check to the BCS Foundation, Attention: Adam Muzic Scholarship, 175 Bingham Road, Asheville, NC 28806. Or visit foundation.buncombeschools.org.