Obituaries of the Swannanoa Valley July 13

Obituaries of the Swannanoa Valley July 13

She was born April 12, 1934 in Swannanoa, NC to the late Sidney Eugene Slagle and Opha McMahan Slagle.  Mrs. Hayes worked as a the secretary for The Episcopal Diocese of WNC for 32 years until her retirement.  She loved her family and took great care of everyone.  She was considered a “second mother” to many people.

In addition to her parents, she is also preceded in death by her husband, Julius Jackson “Jack” Hayes; one brother, Bobby Slagle; and one sister, Genevieve Black.

Surviving Mrs. Hayes are her son, Bobby Hayes and wife, Kim of Swannanoa; one granddaughter, Emily Hayes of Swannanoa; one sister, Judy Lebrun of Canada; two sisters-in-law, Juanita Slagle of Swannanoa and Joann Ivey of Portsmouth, VA; and several nieces and nephews.

Advantage-Kirksey Funeral Home of Marion is honored to be entrusted with the care of Mrs. Hayes and her family.  Words of comfort may be shared with the family at kirkseyfhmarion.com. 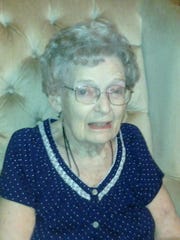 Mrs. Stewart was born October 13, 1924 in Buncombe County to the late Arthur and Nell Patton.  In addition to her parents, she is preceded in death by her husband, Ralph F. Stewart; sister and brother-in-law, Ernestine P. Miller and Lawrence Miller; nephew, Larry Miller; sister-in-law, Isabelle Pack. Bernice is survived by numerous nieces, nephews, and cousins.

The family received friends Friday, July 7, 2017 from 1 to 2 p.m. at the funeral home with a graveside service immediately following at Mountain View Memorial Park with Rev. Don Penland officiating.   Flowers are acceptable or memorials may be made to Mt. Olive Baptist Church, Building Fund, 64 Mt. Olive Church Road, Asheville, NC 28804.  Arrangements are in the care of Harwood Home for Funerals, harwoodhomeforfunerals.com.

Mr. Ball was born January 6, 1937 in Virginia to the late George Washington Ball, Jr. and Nanny Ball. Lewis was the owner of Lewis & Son Heating and Air Conditioning.  In addition to his parents, he is preceded in death by his wife, Edna Ball; and five brothers.

Lewis is survived by his son, Stephen Ball (Beata); grandchildren, Gideon, Stephen and Dorinda; three sisters; and a sister-in-law.  Harwood Home for funerals is assisting the family.

Robert Norman Daigle, a native of Augusta, Maine, was born January 25, 1930 to René and Irene La Pierre Daigle, and died July 2, 2017 at VA Hospice Care, Asheville, NC.  Before moving in 1994 to these beautiful mountains surrounding Asheville, he lived for 40 years in Suffern, NY, where he had been employed as an engineer with Avon Corporation.

He is survived by his wife, Wilma Fabian Daigle; a daughter (and son-in-law), Robbin Lynne Marcus (Dave Marcus), Atlanta, GA; and granddaughter Anne Deborah Schaffer, Baltimore, MD.  He was predeceased by his parents and his first wife, Virginia Ann Daigle.

He loved music.  As a percussionist he played in bands in the Asheville-Hendersonville area. He took to ballroom dancing and cycling while living in Suffern.  In Asheville he was a weekly contra dancer.  He enjoyed fishing, tied his own flies for fly fishing, and taught young people to do the same.

He was a member of Christ Community Church, Montreat, had been a volunteer at the Swannanoa Valley Christian Ministry, Black Mountain Home for Children, and at the Cove.  Gifted in mechanics and electricity, he used those skills to help others with their projects and home repairs.

A graveside service will be held at the Brick Church Cemetery, Grandview Road, Spring Valley, NY at a later date. Condolences may be made to the family at AshevilleMortuaryServices.com.

Stuart Austin Moseley, aged 30, of Montreat, died Monday July 3rd, a victim of the opioid epidemic.  Stuart struggled for more than 12 years to live free of the highly addictive substance.  His death is one of many caused by this health crisis. His family shares its sympathy and mourning with the national community of those devastated by opioids.

Stuart was born in Gainesville, Florida.  He was a member of the Buchholz High School band and the youth choirs of First Presbyterian Church in Gainesville.  Music was a lifelong interest.  He was an avid reader and was innately curious.  Stuart was a student at Asheville-Buncombe Technical Community College, enrolled in the Information Systems Security program.

Stuart was known for his humor and wit, for showing compassion to the dispossessed, for finding beauty in the mundane, and for being a passionate advocate of social justice.  His memory is honored by his mother, father, sisters, brothers, and maternal grandparents.