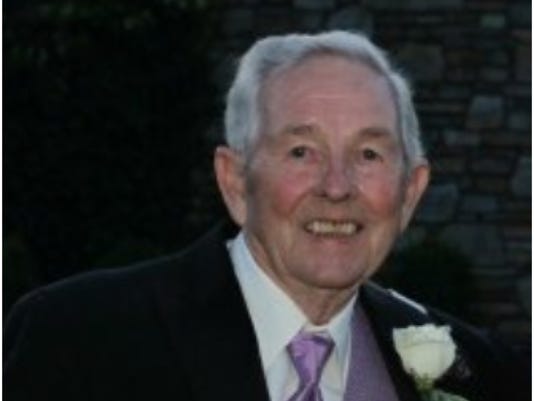 Mr. Edwards was born May 25, 1930 in Yancey County to the late Wes and Esta Edwards.  He was a veteran of the US Army serving during the Korean War.  Jack was a member of Calvary Free Will Baptist Church where he served as a Deacon.  Jack loved to garden and work in the yard.  He loved his family and friends.

In addition to his parents, he is preceded in death by his son, Randy Edwards; grandson, Travis Walker; five brothers and one sister.

A Celebration of Life Service was held Wednesday, March 22, 2017 at 12:30 p.m. at Calvary Free Will Baptist Church with Rev. Frank Cantrell, Rev. Jack Taylor, and Rev. Larry Collins officiating.  Burial was in the Western Carolina State Veterans Cemetery.  The family received friends Wednesday, from 11:30 a.m. to 12:30 p.m. at the church prior to the funeral service.

The family would like to extend a sincere thank you to the staff and nurses of the John F. Keever Solace Center for their loving care and support. Arrangements were by Harwood Home for Funerals, 828-669-2977, harwoodhomeforfunerals.com.

Mr. Worley was born April 11, 1927 in Buncombe County to the late Luther and Zona Worley. He was a Veteran of the US Army and he attended Meadowbrook Free Will Baptist Church.

In addition to his parents, Wade is preceded in death by his wife, Edna Worley; and brothers, Francis, Luther and Robert Worley.

Wade is survived by his son, Arnold Worley (Wanda) of Marion; grandchildren, Steve Worley (Lisa) and Amanda Worley; and great-grandchildren, Lauren and Michael.

A Celebration of Life Service was held Tuesday, March 21, 2017 at 11:30 am at Meadowbrook Free Will Baptist Church with Rev. Randy Stone and Arnold Worley officiating. The family received friends immediately following the service.  Burial was at 2 p.m. at the Western Carolina State Veterans Cemetery with military honors.  Arrangements were by Harwood Home for Funerals, harwoodhomeforfunerals.com.

Joshua Tate King, 41, of Hendersonville, N.C. went to be with his Savior on March 16, 2017. Josh was born in Terre Haute, IN on August 17, 1975. He grew up in Oshkosh, WI and later moved to NC after attending college in IN. He was employed by the Black Mountain Police Department for nearly 14 years.

He was preceded in death by his father, Randy L. King of Terre Haute, IN and both his paternal and maternal grandparents.

He is survived by his mother, Bethann King of Oshkosh, WI and his two precious children Lily Nicole, and Joshua Tate Jr. as well as the mother of his children, Jacqueline Gilbert Clark, along with several aunts, uncles, nieces, nephews and cousins.

There was a gathering at the home of Jeff and Kelli Blankenship at 220 Old Fellowship Rd in Swannanoa, N.C. from 3–5 p.m. on Sunday, March 19.  Arrangements were by Harwood Home for Funerals.

Leroy Haynie, 69, of Old Fort, formerly from Swannanoa/ Black Mountain,  passed from our world on Tuesday, March 14, 2017.  Leroy was an amazing family man who enjoyed fishing, spending time and  talking with his family and friends. He also enjoyed arts, crafts, and watching TV.  He honorably served two tours in Vietnam in the Army's 101st Airborne, as a paratrooper & demolition specialist. During his life as a civilian, he worked as a truck driver, mechanic, and machine operator.

Leroy is survived by his loving wife and best friend of 34 years, Lyn Haynie.  He is also survived by his two daughters of which he was proud of and loved dearly, April  Haynie-Solomon and her husband, Leon, of Black Mountain, Sarah Alexander and her husband, Casey, of Old Fort, and Jonathan Haynie and his fiancee, Samantha Solly, of Asheville. Leroy is also survived by 8 grandchildren, Meghan Powell, Trey Reid, Payton Alexander, Maddox Alexander, Jaiden Smith, Shemar Smith, & Mackynzie Haynie, and Harlow Alexander, as well as two sisters, Carolyn Russell & Katherine Haynie, and many nieces, nephews, cousins, & extended family.

A memorial in his honor will be held at the Western Carolina State Veteran's Cemetery at a later date. Condolences may be made to the family at ashevilleareaalternative.com.

Mr. Lewin Thompson Baker, age 93, died peacefully in his home outside of Black Mountain on March 18, 2017.  Lee was born to the late Marvin Hall Baker and Helen Thompson Baker (Finn after remarriage) on April 22, 1923 in Port Allegany, PA.  He was preceded in death by his wife of 69 years, Erna Dysart Baker.

Lee grew up in Port Allegany, PA and served in the Army Air Corp stationed in Germany in World War II. Just before being shipped to Germany, he met Erna and directly after he returned, they were married August 16, 1946. Lee attended North Carolina State University and received a Bachelor of Electrical Engineering degree, which was to be the first of many.   He worked for General Electric for 30 years in Syracuse (NY), Daytona Beach (FL) and Schenectady (NY) before retiring to their mountain home in 1984.

Lee was a dedicated husband and caring father.  He will be remembered for his intelligence, gift of inventing, mechanical aptitude and great sense of humor. Lee is survived by his three children and their spouses, 10 grandchildren and their spouses, and 9 great-grandchildren. In lieu of flowers, the family requests that memorials be made, in Lee's name to Multiple Myeloma Research Foundation, 383 Main Avenue, 5th Floor, Norwalk, CT 06851.

A celebration of Lee's life will be held at the Black Mountain United Methodist Church on Sunday, April 2, 2017 at 3 p.m.  Lee will be buried in his home town of Port Allegany, PA. Arrangements by Harwood Home for Funerals.

A lifelong resident of Western North Carolina, she accepted Christ at age 16 at Mills Chapel Baptist Church and held numerous offices down through the years.

Gladys retired from the State of North Carolina with 37 years with the Department of Human Resources, Substance Abuse Program.

A Celebration of Life Service was held at Mills Chapel Baptist Church, 328 Cragmont Road, Black Mountain, NC 28711, on Thursday, March 23, 2017 at 11 a.m. with Reverends Herbert Grant and Bobby Hill officiating.  The family received friends one hour prior to the service.

In lieu of flowers, memorial contributions may be made to Four Seasons Hospice, 571 South Allen Road, Flat Rock, NC 28731.  Arrangements by Harwood Home for Funerals.

Bonnie Swann, 84, of Black Mountain passed away on March 21, 2017 at the John F. Keever Solace Center in Asheville.

Mrs. Swann was born April 22, 1932 in Buncombe County where she lived all her life.  She was co-owner of Swann’s Grocery and attended Meadowbrook Free Will Baptist Church.

A Celebration of Life Service was held Wednesday, March 29, 2017 at 12 p.m. in the chapel of the Western Carolina State Veterans Cemetery with Rev. Randy Stone officiating. In lieu of flowers, memorials may be made to John F. Keever Solace Center, PO Box 5779, Asheville, NC 28813. Arrangements by Harwood Home for Funerals.

Jean had a sharp wit and intellect, enjoyed writing, reading, bridge, and crosswords. She designed dresses, sewed clothing, excelled in all needlework.  She was an actress, flower arranger, gardener and classical music enthusiast.

After high school Jean worked as a secretary. In 1944 she married Alfred Mangels, who was an architect for the Atlantic Refining Company. They built and lived in their house in Moylan-Rose Valley, PA, with their two daughters until 1972 when Al's job transferred to Los Angeles.  Jean and Al loved the sea and found a house overlooking the Pacific in Rancho Palos Verdes. Together, they enjoyed thirty years in California.

After Alfred's death, Jean moved to Highland Farms in 2008.  In Healthcare the past two years, she was totally dependent on the wonderful staff and caretakers there.  The affection and love shown by them will not be forgotten.

Gifts in Jean's memory can be sent to the Givens-Highland Farms Residents Assistance Fund, 2360 Sweeten Creek Rd., Asheville, NC 28803. Condolences may be made online at PenlandFamilyFuneralHome.com.