The Wild West will come to life on Friday-Saturday March 17-18 at the First Baptist Church of Black Mountain when the Black Mountain Homeschool Group’s theater class performs "Wagon Wheels West." 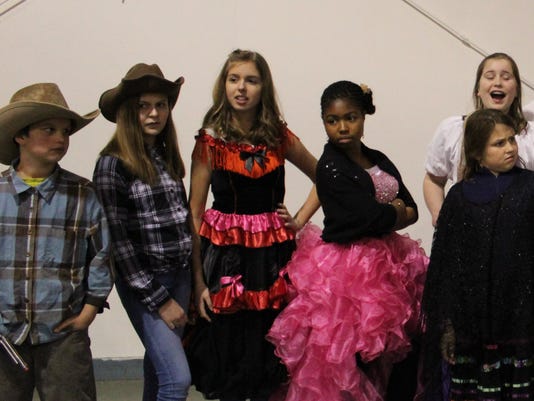 Sudents (and their parents) put their costumes together from all many of resources for the play.(Photo: SPECIAL TO BMN)

The Wild West will come to life on Friday-Saturday March 17-18 at the First Baptist Church of Black Mountain when the Black Mountain Homeschool Group’s theater class performs "Wagon Wheels West."

The production, free to the public, is put on by more than 20 home-schooled kids from around the region. The musical will transport the audience to the fictional town of Vinegar Bottle for an Old West parody.

“Our director Scott Counce is well-known and well-loved in this community,” said Edna Tokay, the homeschool group's coordinator. “I think they’ll be amazed at the talent he’s bringing to our homeschool group.”

The organization provides supplemental programs for parents who homeschool their children.

"The group isn't limited to families in Black Mountain," Tokay said. "Some (come) from McDowell County, some from Asheville and even as far south as Mill Creek and up to Weaverville."

The theater class, one of many the group offers, consists of kids ranging in age from 7 to 18.

"A lot goes into putting on a production like this," Tokay said. "They have to memorize lines. They do casting, costuming and learning how to be on stage in front of an audience. The singing is a big part of what they learn."

Several students will perform solos during the play, according to Tokay.

"It's a stretch for some of our young actors and actresses but they really have a lot of talent and have put a lot of time into the rehearsals," she said

Parents of children acting in the play are responsible for their child's costume, which will make for an array of west-themed looks.

"Some will be handmade, and some will be put together from thrift stores and things like that," Tokay said. "We have good guys, bad guys, and the costumes will help the audience know which is which. Some are quite good."

The set, which depicts a Main Street setting, was a collaborative effort.

"Our actors and actresses haven't participated much in designing the set," Tokay said. "We have some artistically gifted parents that have assisted with that, though. And any parents who are builders are automatically nominated for the set committee."

The March 17 production is at 7 p.m. The March 18 show is at 2 p.m. Admission is free, but donations are appreciated, Tokay said.

"I think people can expect a delightful evening of talented, new actors and actresses showcasing all of the hard work they've done for the last semester and a half," she said. "They have put in a lot of time memorizing lines, rehearsing and getting ready for this big event."