Mid-June is a steady, quiet, tranquil march toward the summer solstice on Monday, June 20

The house wren is one of the birds that sings early in the morning at sunrise.(Photo: James Poling)

The summer solstice marks the turning of the year.  After the solstice arrives, the

sun begin its subtle shift southward.  With the beginning of summer the seeds of its end are sown.  Enjoy this time of abundance in nature because it wanes with the arrival of  the fall equinox in late September.

The rush of another season is over. Summer arrives with cornflower blues and day lily golds.  It is strawberries, red and juicy to man and a bird’s delight. It is a time of the house wren singing its heart’s delight.  It is bumblebees in no hurry and late afternoon thunderstorms making daily appearances.

Blue birds are busy with second clutches in the making.  Sometimes they reuse the first nest site, but usually they scout for a different one.  The male finds the potential nesting sites and the female either gives her approval or rejects them. 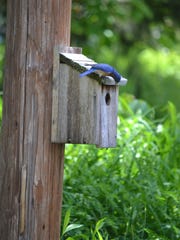 This male bluebird seems to be checking on the female inside the nest box to see if she approves of it. (Photo: Hagen McDonell)

The earliest birds singing in James Poling’s backyard now are the house wren and the cardinal. They start singing soon after sunrise.  For such a tiny bird, the house wren has a big voice.  The bird tips the scales at about 4 ounces and measures about 4 and a half inches long. It is one of the smallest birds to call the Valley home during the summer, with the exception of the hummingbird. It is not only loud but exuberant as it belts out a lot of notes in a short time. Many bird lovers don’t like the loud little bird because it is aggressive and demanding and takes nesting sites from other birds.  The other wrens have gone farther south for the season.

The house wren eats a wide variety of insects and spiders.  They even eat daddy longlegs. They winter in the southern states and Mexico. Although it may have some annoying behaviors, the little birds add a lot of songs to summer mornings.

The Brown Thrasher is one of the most pleasant of summer visitors to the Valley. It is a large, slender, foxy-red brown bird that populates the eastern section of the United Sates in spring and summer.  It spends a lot of time on the ground and scoots under low-growing underbrush when threatened.  However, at other times you will find the male delivering his song from the top of a tree. It eats a wide variety of insects, berries and small fruit. It also dines on lizards and frogs. It adds nuts and seeds as fall approaches. It can crack open acorns with its long bill.

Although the Brown Thrasher wears a stern look with its slightly down-curved bill and staring yellow eyes, it makes a good neighbor and is well tolerated by other ground feeding birds. The male and female look alike.  They mimic other birds in their songs and sounds including the Northern Flicker, White-eyed Vireo, Tufted Titmouse, Wood Thrush and Cardinal. They don't  perfect the sounds of various species like the Mocking Bird does, but they are  prolific in repeating their sounds.

Juvenile bears separated from their mothers at this time of the year are pitiful as they whine and call for her.  Just the day before separating from them she called them to her, protected them and hunted with them.  The yearlings are alone and vulnerable.  Often they stay together for several weeks, eating and sleeping together.  Some may even den together in late fall.

Mid-June is peak birth time for fawns. If you find one, leave it where you find it and move away quickly.  The mother is usually not far.

Whitetail deer bucks are in velvet (covering for growing antlers).

Female coyotes are weaning pups and teaching them to hunt.  If you value your outside cat, you need to put it inside.

Juvenile raccoons are learning to hunt.

Keep out plenty of water for drinking and bathing. Scrub the bird baths to keep algae from forming.