Americana artists Zoe & Cloyd and The Honey Dewdrops share more than a twin billing at White Horse Black Mountain on Sunday, Oct. 29. After meeting in 2010 at the Shakori Hills Music Festival, the two duos became close friends and musical peers who have shared stages up and down the East Coast.

There’s deep compatibility between the two groups, who blend close harmonies with original songs that pay homage in old-time, bluegrass, vintage country and klezmer music. The musicians will perform separate duo sets, then come together for a finale that celebrates their enduring mutual appreciation.

Natalya Weinstein (fiddle, vocals) and John Miller (mandolin, guitar, vocals) of Zoe & Cloyd formed Red June in 2009 with their friend Will Straughan, creating a popular and original blend of country, bluegrass, and American roots music with a dash of indie rock. In 2015 Red June went on hiatus as Will began a new job with an international nonprofit agency and Weinstein and Miller welcomed their new daughter into the world. Although Red June continues to perform on occasion, Weinstein and Miller stay busy as a duo under their middle names, Zoe & Cloyd. Their debut duet recording, "Equinox," was released in April 2015 and was named one of the “Outstanding Duo Albums of 2015” by No Depression Magazine. The duo has gotten career momentum with well-received shows at MerleFest, Music City Roots and other major festivals. 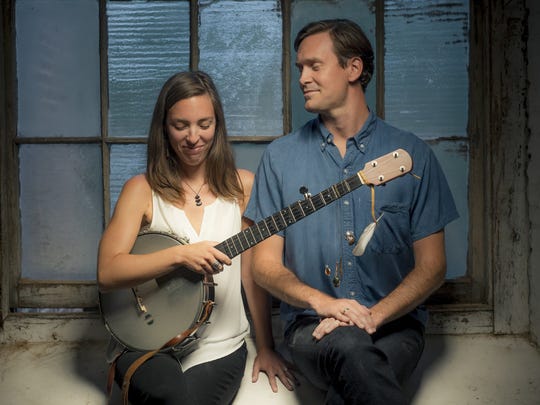 Laura Wortman and Kagey Parrish are celebrating nine years of touring as The Honey Dewdrops. (Photo: SPECIAL TO BMN)

Laura Wortman and Kagey Parrish are celebrating nine years of touring as The Honey Dewdrops, years marked by performances on club and festival stages throughout North America and Europe. With tight, plaintive harmonies and intertwining banjo, mandolin and guitar lines, their sound occupies some of the same timeless soundscapes as the work of Gillian Welch and David Rawlings, conveying the essence of each song with uncluttered clarity.

After abandoning their Virginia base for two years of life on the road, Wortman and Parrish now call Baltimore home. There, they wrote and recorded their newest full-length album "Tangled Country."

Who: Zoey & Cloyd, The Honey Dewdrops