A confluence of two talented and inspiring artists from the Swannanoa Valley, "Woodworks" makes for an intriguing exhibit in Black Mountain. 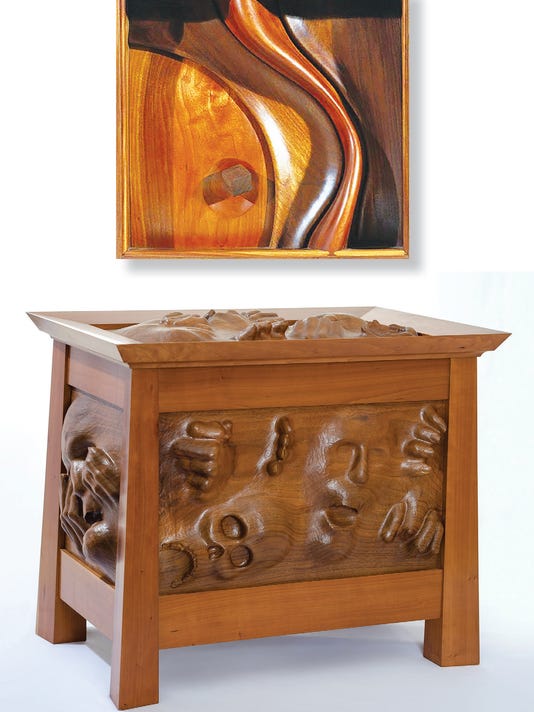 Among the pieces featured in "Woodworks" are, at bottom, "War Chest" by John Casey, and "Moon Strand" by Dirck Cruser.(Photo: SPECIAL TO BMN)

The Black Mountain Center for the Arts's new exhibit features the work of two men who left a lasting impression on the Warren Wilson College community, Dirck Cruser and John Casey. The show, "Woodworks" in its Upper Gallery starts from a 6-8 p.m. reception Friday, April 20 and runs through May 18.

Dirck Cruser (1940-1996) was a prolific, self-taught abstract artist who worked in a wide range of mediums. He moved to Warren Wilson College from Santa Barbara, California where he made his living as a graphic designer. While in California he began carving wooden shore birds, children’s toys and furniture before creating his first wood sculpture commission in 1971.

After moving to North Carolina, he built a home from several native wood species just outside the Warren Wilson campus. He is best known locally for creating Asheville’s first commissioned public art work, the iconic "Energy Loop," in 1983. Controversial at the time of its installation and moved to a new site across from the courthouse in 2009, Energy Loop is made of CorTen steel.

In the '90s, Cruser’s focus shifted toward painting. His artwork has been widely exhibited, and he received numerous awards and fellowships. Cruser’s widow Karen and daughter Laura are assisting with the curating of this show.

John Casey (1943-2017) was a free-spirited, influential educator and Renaissance man. Prior to joining the Warren Wilson faculty in 1991, he taught at Iowa State University, Illinois Wesleyan University and the University of Toledo, and attended the Art Institute of Chicago. He spent 17 years creating wood sculpture, cabinetry and spiral staircases, repairing antique furniture and building original furniture, ultimately blending his aesthetic and skill to create art furniture.

After marrying his wife Rebecca, he returned to teaching and joined the Warren Wilson College faculty as a philosophy professor. He created the Integrative Studies Major, was the college philosopher and served three years as interim vice president of academic affairs and dean.

Many local people were unaware of his passion for woodworking. He created the large, wooden Warren Wilson College sign that greets visitors at the campus’ south entrance. Beloved by students and colleagues, he used his art to explore social outcasts and politics.

The Black Mountain Center for the Arts' Upper Gallery is at 225 W. State St. For more, call 669-0930 or visit BlackMountainArts.org.