"It’s a Wonderful Life: A Live Radio Play" will be performed Fridays and Saturdays, Dec. 15-23. 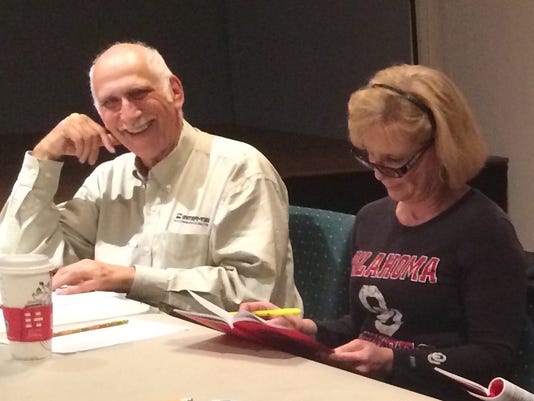 The Front Porch Theatre at the Black Mountain Center for the Arts has announced the cast for its upcoming holiday performance of "It’s a Wonderful Life: A Live Radio Play," written by Joe Landry.

Directed by Max Baron Reid, the classic Frank Capra Christmas movie comes to life as five actors portray all the citizens of the fictional Bedford Falls for a live radio broadcast set in radio station WBFR in Manhattan on Christmas Eve 1946.

The Front Porch Theatre has cast Elijah York as Jake Laurents, the character who portrays George Bailey in the radio drama. Husband and wife team Mike Yow and Karen Covington-Yow, playing Freddie Fillmore and Lana Sherwood, have been cast in multiple roles.

Recently the whole production team gathered for a script read-through. Before the actors started, artistic director Matt Lutz described the set design, emphasizing the sound effect elements that will be manipulated by the cast when they are portraying the dozens of characters at the microphones.

Costume designer Tara Nyanga got measurements for the period costumes she will compile for the actors, and hair and makeup designer Carson Graf consulted reference material she had brought of 1940s hair designs. Mary Soyenova and Zee Cox were there because they will be contributing to the set and the Foley elements.

Front Porch Theatre stage manager Grace Carter kept things organized and read the stage directions as the cast sat around a large table and read their parts together for the first time.

One of the things director Reid stressed during the rehearsal was that “the first word in this endeavor is not theater, but ‘community.’”

Larry Pearlman is an ideal example of the spirit of community. Before moving to Black Mountain, Pearlman for five years wandered the globe, from Costa Rica to Africa to New Zealand. Once the former salesman and book author arrived here in June he joined the Unitarian church, a hiking club, a bridge club, a storytelling group, a Tai Chi class and has attended a wide range of music and theater performances.

One production was "Freud’s Last Session" at the Front Porch Theatre in the fall. It was here that he heard about auditions for "It’s a Wonderful Life" and decided to try out. Though Pearlman had performed in summer stock as a New Jersey teenager and in church plays as an adult, he hasn’t bitten off a part quite as demanding as the 10 or so characters he will play including Clarence the Angel, who is working to earn his wings.

“It gave me confidence to see the varying experience and talent of my fellow cast mates, and the efficiency of the support crew,” Pearlman said. “The fact that so many people know what they are doing makes me feel good to be a part of this. I’m really looking forward to getting into rehearsals.”

Tickets for the play are on sale. The Front Porch Theatre at the Black Mountain Center for the Arts is at 225 W. State St. For more or to order tickets call 669-0930.