Guastavino Jr. was hardly standing in his father's shadow

Works by the master's son are masterly palaces all over America

Guastavino Jr. was hardly standing in his father's shadow 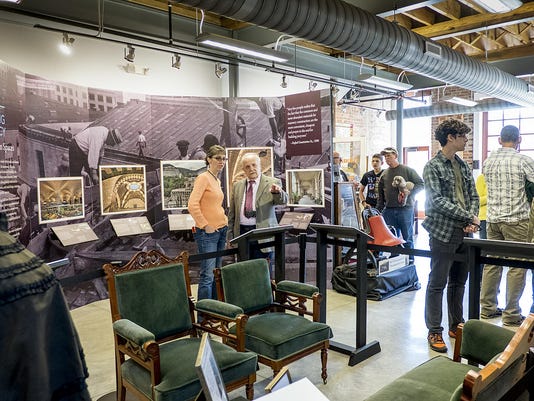 In recent years, a fine book and an excellent exhibition have told the full story of the achievements of master builders Rafael Guastavino and his son. Even so, an overemphasis on the father has overshadowed the son.

You can see details of wok by Raphael Guastavino Sr. and Jr. at the exhibit at Swannanoa Valley Museum. (Photo: Blake Madden/SPECIAL TO BMN)

The surprising success of the exhibition that Ochsendorf created made many thousands of Americans aware for the first time of the more than 1,000 works of father and son in 31 states and five countries. But the son, who created most of those works, remains vague in the public mind and imagination.

On Sept. 28, 2012, the exhibition, appropriately entitled “Palaces for the People: Guastavino and America’s Great Public Spaces,” opened in the Boston Public Library, site of the father’s first major American tile vaulting and dome project. It then moved to the National Building Museum in Washington, D. C., then to the Museum of the City of New York. 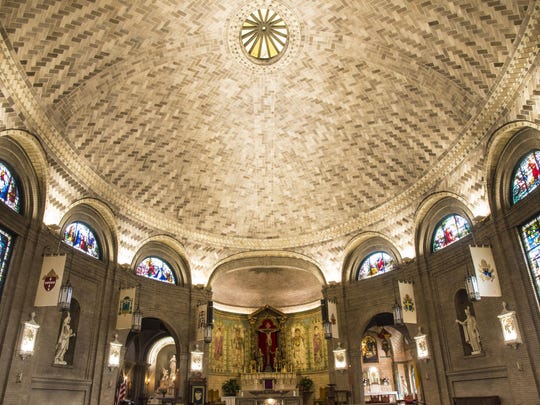 The dome that Raphael Guastavino designed in the Basilica of St. Lawrence in Asheville is the largest free-standing elliptical dome in North America. (Photo: Paul Clark)

When the 39-year-old father and his 9-year-old son arrived at Castle Garden, where immigrants were processed, in 1881 at the foot of Manhattan, Rafael Guastavino Sr. was a successful Spanish master builder with $40,000 in his pocket. To know that the son created the tile ceiling in the Ellis Island Registry Hall 36 years later is delightful.

The pre-adolescent son witnessed his father’s struggle to establish himself as an architect in the New World. Famous architects hired him to employ his skill as a unique tile craftsman in the vaulting and domes of their buildings. He offered tile that was beautiful, cheap, extremely strong, and above all fireproof. He became so successful that George Vanderbilt hired him to create the vaulting and domes, and the swimming pool that millions of people have seen at the Biltmore Estate.

With only six years of formal schooling, the son, now 23, had worked as apprentice to his father. He was so talented that in 1892, at age 19, he received four patents.

When Guastavino Sr. decided to buy more than 1,000 acres in Black Mountain and build his home of inexpensive wood and develop a business in lumber, wine, and bricks, his 23-year-old son had taken on more and more responsibility for the work of the hugely successful R. Guastavino Company.

The father’s last creation was the St. Lawrence Church in Asheville, now the Basilica of St. Lawrence, the dome of which is the largest elliptical dome in North America.

And when his father died on Sept. 1, 1908, Rafael Jr. finished the church. His father is entombed there. The son later added some rather ornamental enhancement to the father’s characteristically simple style.

With the help of an unusually talented bookkeeper who had suffered through the father’s poor management of several factories in the north, Rafael Jr. continued the tile vaulting works in 30 states and in Spain, Mexico, Panama and Canada. Often without knowing the names of the creators, millions of people have enjoyed the distinctive, prize-winning works of the Guastavino Company for 125 years.

Ochsendorf’s book includes a list of more than 600 extant “Palaces for the People,” by state and county. Most are to be viewed in New York, Massachusetts, Washington D. C., New Jersey, and Pennsylvania. Here is my choice of 13 “palaces” most likely to prove to be familiar:

·       University of Pittsburgh Cathedral of Learning

In addition to the father’s world famous Biltmore Estate and the impressive Basilica of St. Lawrence, the people of North Carolina have likely knowingly or unknowingly seen worked designed by the son in eight “palaces.”

Rafael Jr.’s son, also named Rafael, had to abandon a desire to carry on the family tradition as an architect. A farmer and an aviator, in 2006 the 95-year-old Guastavino published a useful, factual, illustrated book about his father and his grandfather called “An Architect and His Son.”

Well-deserved attention given to the works of the son enriches our appreciation of both master-builders.

David Madden is the author of numerous books of fiction and nonfiction.