The artistry of great literary works, costume design, and movie making comes together in “Designed for Drama: Fashion from the Classics,” Biltmore’s new exhibition premiering in Biltmore House on Feb. 10, 2017.

Leslie Klingner, Biltmore’s curator of interpretation. with the dress that Nicole Kidman wore in "The Portrait of a Lady."(Photo: Biltmore Estate)

Inspired by George Vanderbilt’s love of literature, “Designed for Drama” showcases more than 40 award-winning movie costumes from films based on favorite books in his collection. The exhibition will run through July 4.

Once recognized as “one of the best read men in the country” by New York media, Vanderbilt amassed a library of more than 22,000 volumes at his Asheville home. A reader from an early age, he began at the age of 12 keeping a record of the books he had read, including the title and author of each work. By his death in 1914, Vanderbilt had logged 3,159 books. He also counted leading authors of the era as personal friends, including Henry James, Paul Leicester Ford, and Edith Wharton—all of whom stayed at Biltmore House as guests of George and Edith Vanderbilt. 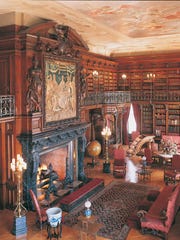 George Vanderbilt amassed more than 22,000 books for his library in his Asheville home. (Photo: Biltmore Estate)

That literary connection is a central theme in the exhibition, with the original books from Vanderbilt’s library that inspired the films accompanying the costumes. This also marks the first time most of the volumes have been displayed to the public.

The exhibition features elaborate costumes from 14 recent films that bring literary characters to life, from the entertaining detective duo of Holmes and Watson in “Sherlock Holmes” to the creation of  the Peter Pan story in “Finding Neverland.” The grand fashions of 19th century Russia are strikingly portrayed in “Anna Karenina,” while the simpler attire of Jane Austen’s characters in “Pride and Prejudice” portrays one of the BBC miniseries’ most memorable scenes.

The costumes on display reveal the attention to detail involved in period costume design, and represent the work of costume designers at the highest level of their profession, numbering Academy Awards and Emmys among their honors.

“We have an exquisite dress that Nicole Kidman wore in ‘The Portrait of a Lady,’” says Leslie Klingner, Biltmore’s curator of interpretation. “It’s black and gold, embroidered with flat sequins correct to the time period.”

This is Biltmore’s third costume exhibition, all of which brought together the estate’s museum services team and Cosprop Ltd., London, an award-winning costumier that has designed fashions for film and television productions around the ­­­globe. Work leading up to “Designed for Drama” has involved a new collaboration, this time with Fashion Institute of Design and Merchandising in Los Angeles.

Carolyn Jamerson, the institute’s collections manager and chief mount maker, traveled to Biltmore to create wigs on-site for the costumed mannequins. Jamerson is one of the few paper wig designers and makers in the country. While she uses simple tools to construct each wig, the precision and attention to detail results in a life-like yet ethereal effect. The wigs, she said, are meant to provide texture and structure without distracting from the costume.

Admission to “Designed for Drama: Fashion from the Classics” is included with a visit to Biltmore.