Prepare for a scare at new haunted house

Prepare for a scare at new haunted house

Visitors to the Tormented Nightmares haunted house will have to contend with creepy special effects.(Photo: Fred McCormick)

The newest tenant in the Eastside Business Park is likely to scare a few people in the coming weeks.

In fact, if all goes according to plan for owners Miranda Dillon and Stacey Weaver, their 10,000-square-foot haunted house will scare a lot of people.

Tormented Nightmares Haunted House, which will open its doors at 7:30 p.m. on Friday, Sept. 30, will take what will likely be groups of screaming customers through four distinct haunts through Halloween.

Groups of 6-8 (larger groups can be accommodated) will wander through a maze of themed sections for 20-30 minutes, depending on how well they handle fear.

"It will take about that long for most groups," Dillon said. "It will probably be a little bit shorter for the ones that are really scared and rush to get through."

Dillon and Weaver began construction inside of the space in early August, but the vision for the attraction began way before then.

"We started researching this around a year and a half ago," Dillon said. "We're both horror movie junkies, and we've watched a lot since we started looking into doing this. A lot of the inspiration for our themes came from the movies."

Tours will wind through sections with names such as the Catacombs of Evil, Town of the Tormented, House of the Dead and Neighborhood of Nightmares. 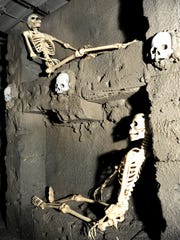 The Catacombs of Evil is one of four themes at Tormented Nightmares, which opens on Sept. 30. (Photo: Fred McCormick)

Tormented Nightmares is the first venture into the world of haunted houses for Dillon and Weaver, who not only constructed the walls inside the attraction, but created the special effects as well. The couple has procured everything from an old gurney with convincing faux blood.

Dillon and Weaver attended the Halloween & Attractions Show in St. Louis, Missouri back in March, the self-proclaimed largest of its kind.

"My jaw hit the floor when we walked in," Dillon said of the trade show. "We spent four days there and attended classes for special effects and other things related to operating successful haunted houses."

Tormented Nightmares will be open from 7:30-11:30 p.m. on Sept. 30 and Oct. 1, as well as Oct. 7-8. It will be open during the same hours from Thursday-Saturday for the remainder of October. It will also be open on Halloween. (Photo: Fred McCormick)

The haunted house will employ 25-30 actors who may or may not be hidden around every corner, according to Dillon.

"We really want to make this a haunted house that people will remember and talk about," Dillon said. "We're really looking forward to opening night."

The width of each room allows for wheelchair access, according to Dillon, who said she wanted the haunted house be accessible to as many people as possible. It is not recommended for children under the age of 13. But parents can decide that for their own children, Dillon said.

"If you have a child that's easily scared, you won't want to bring them," she said.

Want to be tormented?